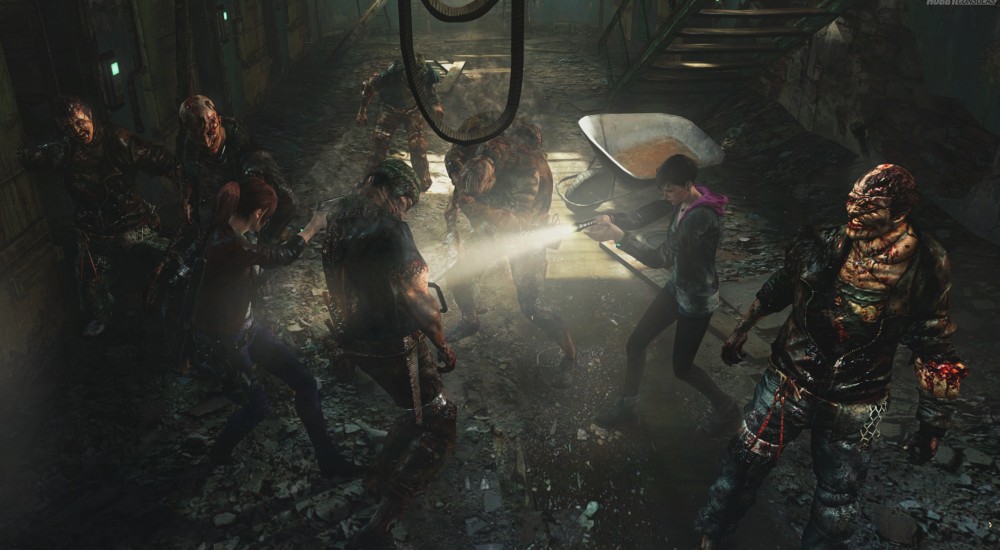 What makes a good Resident Evil game besides the atmosphere? Fantastic enemies to battle against, of course! Watch a couple of developer diary videos on the enemies and sound direction in the upcoming Resident Evil Revelations 2.

Behind the scenes at Capcom, we get a small look into just what sort of monstrosities and bio terrors we'll encounter together when playing Revelations 2 by ourselves or co-operatively. For starters, we get a chance to see the previously revealed Revenant in action, along with a first look at a creature called a Glasp. The latter is able to "secrete a gas from its body that impairs the vision of any animal in its vicinity, and uses this advantage to stealthily approach and attack prey without warning." Yikes. From the looks of it, it seems like only one of the characters is cable to see the creature when it attacks, clearly encouraging cooperation between the characters to take it down.

Of course, audio clues as to whether or not an enemy is lurking nearby or is on your tail is very important to a game like this. Having the right sound in a game breeds the best immersion possible, so what sort of creative process goes into producing the sound and score for the game? Luckily, we get a behind-the-scenes scoop on this aspect as well. Take a look:

Resident Evil Revelations 2's first of four parts is only a few months away from releasing, on February 25th digitally and on March 17th in retail. The first part will feature Claire Redfield accompanied by an all new playable character. Season Pass contents are also detailed in our previous article here.