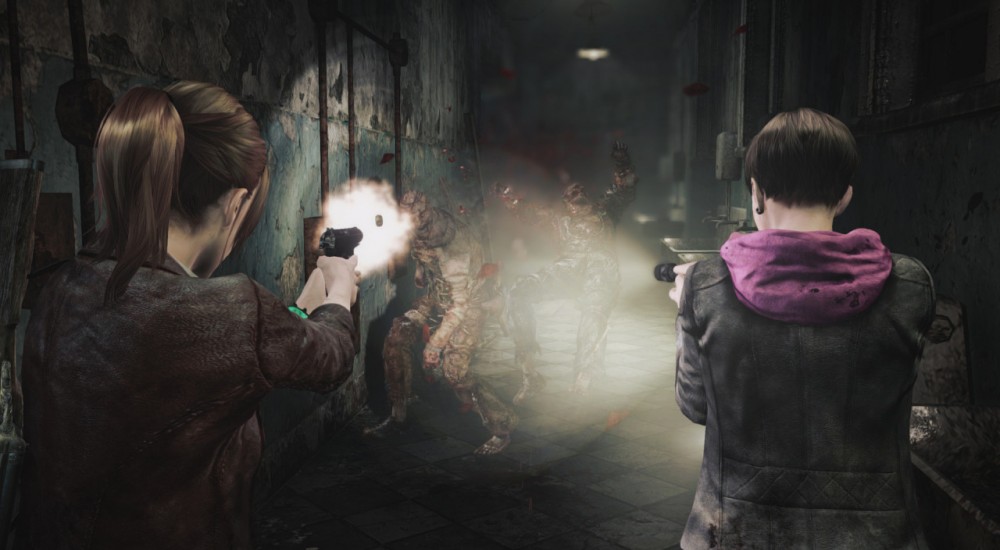 Don't turn into a Jill Sandwich. Read on for new details regarding Resident Evil Revelations 2, including its targeted release dates and Season Pass info!

Getting a single player game out of the way, the nostalgic Resident Evil HD remastered version just arrived on consoles! What made the series into the juggernaut that it is today can now be enjoyed in HD, which we simply cannot ignore. Go check it out if you haven't played it already! While Resident Evil doesn't include any type of co-op mode, it's Resident Evil Revelations 2 that we really have our eye on. In less than a month, the Xbox One, PS4, and PC version of the game will release, actually only Part 1 will.

See, Capcom has going an episodic route with Revelations 2, so players will need to purchase either each Part (1-4) individually at $5.99 or through the Complete Season Pass at around $24.99. Each episode will focus on two different characters to play as in co-op, each with their own unique traits and/or abilities. For the first pair, the legendary Claire Redfield will be teaming up with a brand new character, Moira Burton. After being kidnapped and left on a stranded prison island, they eventually run into monsters that aren't too friendly. Barry Burton, another classic character of the franchise, teams up with another newcomer Natalia Korda for the second part. On his way to find his lost daughter residing on the same island, Barry runs into Natalia and witnesses her mysterious powers. Apart from the characters you'll play as during these episodes, the very popular Raid Mode featured in Revelations will be returning here in Revelations 2. To make the mode even more appealing to fans, two infamous characters will be playable in it: Hunk and Albert Wesker.

Beginning on February 24th, the first episode (along with the Season Pass) will be available via Xbox Live, PSN, and Steam, followed by another episode each week for four weeks thereafter. We also encourage players to purchase the Season Pass, as it will include Parts 1-4, two additional episodes that will explain certain characters' back stories, and Hunk for Raid Mode. If the retail disc version is more of your thing, however, then you'll have to wait until March 17th to finally land that.