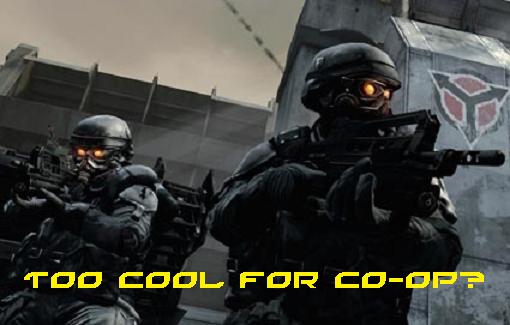 Killzone 2 is the latest and greatest game coming for the PS3 later this month.  The hype for this game has been intense.  Some hail it as the greatest console FPS ever.  Others call it the best game of 2009.  Too bad the campaign is only single player, and the online multiplayer is only competitive, eh?  Co-Optimus finds this disappointing, and we're not alone.

IGN :
While the story is a solo campaign, you get the sense that there is a distinct co-op feeling to it, because you are almost always partnered with one or more soldiers as you run through the various environments.

1Up :
Joining you in battle are the other members of Alpha squad. It would have been nice to play co-op with friends (they are strictly A.I. controlled)...

Eurogamer :
For much of the game, you'll be accompanied by at least one of these gruff stereotypes, but it's far from a squad game. They'll react fairly intelligently to the situation, but their presence ultimately only serves to remind you there's no co-operative mode, and Killzone 2 constantly feels like a game designed for co-op. There are often multiple ways to approach each level, different routes that take you up, over and through the crumbling Helghast architecture. Since you're unable to tell your AI partner to take the high road, you'll inevitably wish for a human friend who could really take advantage of these strategic opportunities. It's a baffling omission, and Killzone 2's most obvious weakness.

To me, at least you won't be the BESTEST CONSOLE FPS EVAR without co-op!  Sony: we want to love that shiny, awesome Blu-ray player Playstation 3 we bought, but sometimes, you make it really tough.