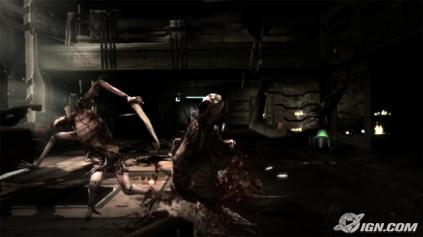 Yesterday, we reported the announcement of Dead Space Extraction.  This was great news for co-op fans, as the first Dead Space game got generally good reviews, and the Wii version added in co-op.  More details have since come to light, though, that have us a bit less excited.  But just a bit.  Consider these quotes from execuitive producer Steve Papoutsis.

Extraction is not your typical Rail Shooter. Our goal is to innovate and push the genre forward like Dead Space did for third-person action survival horror.

Our intention is to deliver a frenetic first-person experience that hardcore Wii gamers and veteran Dead Space players can all enjoy. We plan to deliver the same production values, pacing and immersive feeling that has become a trademark of the Dead Space team to the Wii for the first time.

So, it looks like Dead Space Extraction will be more akin to House of the Dead Overkill, or Resident Evil Umbrella Chronicles.  That's too bad, we were hoping it'd be more like... well, the original Dead Space, but with co-op.