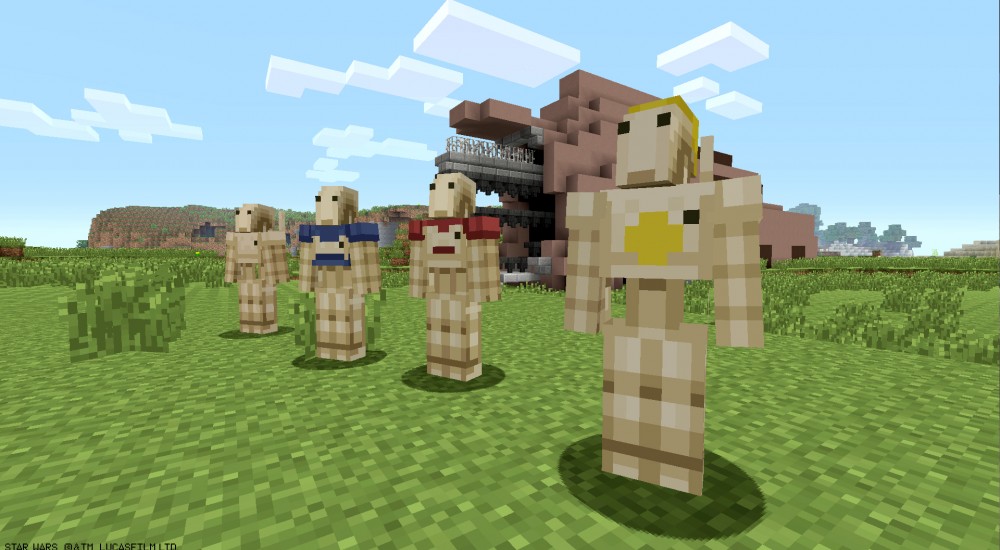 As a hugely popular single-purchase game must, Minecraft has been shifting its revenue stream more and more away from new users, instead focusing on providing extra content (both paid and free) for those already embedded in their franchise.  Content packs are, naturally, one of the most clear-cut ways of doing so for consoles, as players can spend a few bucks for the chance to build sick fortresses as Gordon Freeman or the dude from Trials without the hassle of modding websites.  The latest iteration of content packs is threefold, adding the following:

The first of those contains over 50 skins from the Star Wars prequel trilogy, ranging from Darth Maul and General Grievous to Mace Windu and Obi-Wan Kenobi.  You can find the full list here.  The second contains new skins, textures, music, and pre-made iconic Halo worlds for you to explore (my personal recommendation is to do so as Watto).  Finally, the Halloween Mash-up gives you the chance to creep out your friends by becoming one of a number of classic ghouls, like Swamp Monster and the Bride of Frankenstein, and just staring at them from a far off cliffside.  Alongside that, the pack includes new music, textures, and a full freaky world for you to run around in as you gorge yourself on individually packaged candies.

As mentioned above, all three packs are available for the Xbox One and Xbox 360 versions of the game, while PlayStation 3 and PlayStation 4 users must make due with the Star Wars and Halloween packs.  Given that it features eight player online co-op, I'd be curious to see just how many franchises one can intertwine.  I bet that leads to some good (terrible) fanfiction.