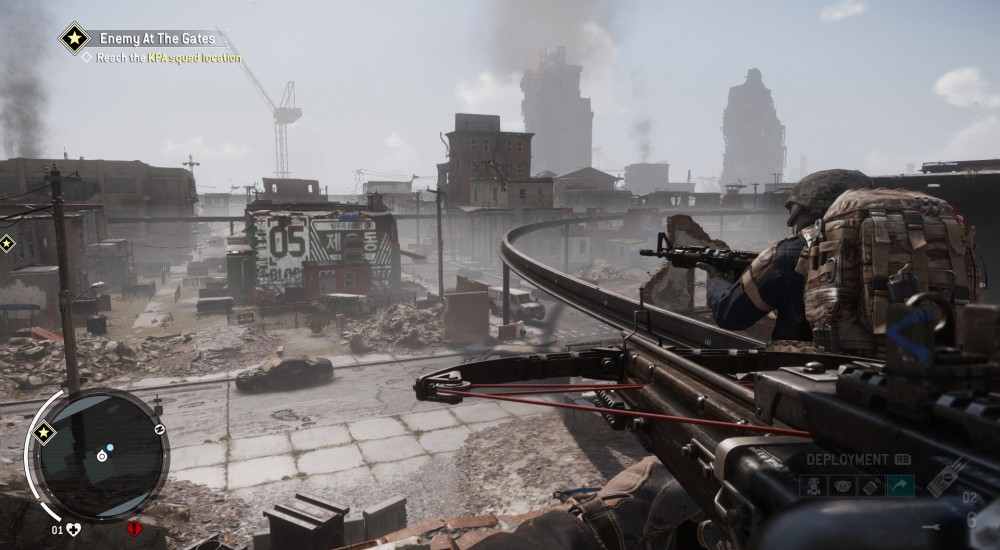 This past weekend publisher Deep Silver and developer Dambuster Studios kicked off a limited closed beta for Homefront: The Revolution on Xbox One. The beta was the first step to testing the game's multiplayer infrastructure and gather some feedback. We were lucky enough to get our hands on, and played through the three available missions; delving into the unlocks and nuances this early look had to offer.

The core Resistance mode, the game's co-op experience, is built around your character(s). You can create a resistance fighter from a few dozen preset pieces and then after playing and earning money, can purchase "crates" which contain random items (cosmetic, weapons, etc) to further customize your character. For instance after a few crates I received a watch, a backpack, a different set of pants, and of course...a hat. This was along side new attachments for weapons, and some other goodies. There will be a pay option here to unlock crates with real money, that seems to be the pattern these days with games; and honestly I'm OK with that. Especially since all future DLC in Homefront's Resistance mode will be free for players, thereby, not splitting the player base and keeping a healthy count of folks available to take on missions. Speaking of missions I played the three missions available in the beta twice each, once on easy and once on normal difficulty. The missions are multi-tiered, with objectives spawning off into other side missions. In one mission once we located enemy patrols, we had to hack into radio towers to pinpoint a location and then assault it. In another mission we needed to infiltrate an enemy base, open the gates for our AI army to enter, and then escort a convoy to safety. Another mission even had us zooming around the map on motorcycles, avoiding KPA road blocks.

For the most part the missions were designed for co-op play, with several paths to victory and map design leading to different methods of assault and positioning based on player class, skill, and ability. With the maps being open world though, players can split up pretty easily, so while this might provide some strategic advantage, you can quickly get overrun and need to wait for a revive or checkpoint respawn.

Homefront: The Revolution has an interesting inventory and crafting system from the limited time I saw it. You'll find parts around the world which you craft into things like Molotov cocktails, explosives, and hacking devices on the fly during missions. You can learn new "recipes" by leveling up your character and unlocking skills which aid in the speed of creation and the effeciency. The missions themselves also offer multiple goals and optional goals during play which yield XP and cash bonuses. The speed at which you complete a mission or the number of enemies killed by your team are just some of these. The missions themselves seem to average between 10 to 20 minutes to completion on the Easy and Normal difficulties, I never was able to complete a mission on Hard as the difficulty (in both enemies and finding players) really ramped up. With twelve missions available at launch and a few difficulty levels there should be a solid amount of content alongside the single player campaign.

If there's anything to be worried about from the beta there were two things that stuck out at me. For one, enemy AI was pretty poor. They pretty much just ran straight at you or at the loud noise you created. The harder difficulties were only harder because of the sheer number of enemies thrown at you. Which brings me to the second issue, on Xbox One there were some definite performance issues. Obviously this is a beta and the final version is three months away, so there's plenty of time to polish.

Homefront: The Revolution launched with its Resistance co-op mode on May 17th for Xbox One, PC, and PlayStation 4. You can pre-order the game now on Amazon and get a bunch of unlocks for your co-op character.