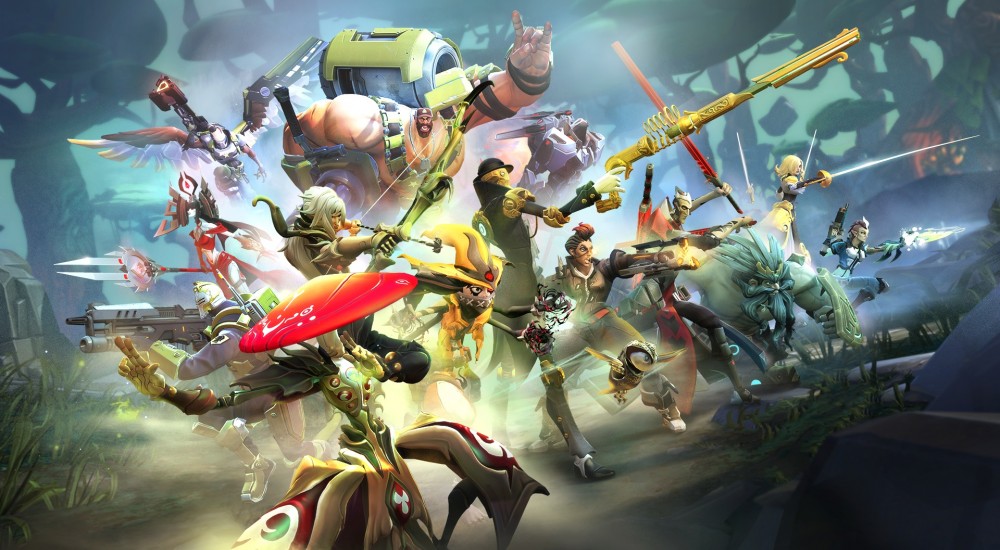 Our co-op review of Battleborn has been posted, but you may have some questions. Glorious questions that pertain to the co-op nitty gritty. We've got your back. Below you'll find answers to questions like: "how many?" "how do?" and "what is?" except, you know, more specific.

How many players can play Battleborn locally (couch co-op)?

Two players can play split screen on PS4 and Xbox One. PC local co-op is not supported.

On the PlayStation 4, both players must have a PS+ account in order to play the game. This is a requirement regardless of whether you want to play online with others or not. If only one player has a PS+ account, then he/she is the only that can play. The other player will get an error if they try to join.

On the Xbox One, only one person needs to have an Xbox Gold subscription due to the sharing feature. How is player progress saved?

Progression is saved individually per player. Any experience, gear, and credits you acquire when you play (whether online or locally) is saved to your account. Command Ranks, acquired gear and credits, character unlocks, and Character Ranks are saved per platform, meaning if you play the game on the PC and then start playing on the PlayStation 4, none of that will carry over.

How many players can play Battleborn via system link or LAN?

LAN and System Link is not supported for Battleborn.

How many players can play Battleborn online?

Up to 5 players can play the co-op missions online together.

5 players can play together by combining local and online means.

What direction is the screen split in couch co-op for Battleborn?

The split screen is a horizontal split.

Does the PC version of Battleborn support split screen play?

What do the co-op Story Missions entail? Are they just MOBA style matches against A.I. bots?

Story Missions are objective-based encounters that usually take anywhere from 30 minutes to an hour to complete (similar to Strikes in Destiny). You may have to fight your way through a series of enemies and bosses, or defend specific targets against foes. They are distinctly different from the PvP matches. How do you begin a co-op session in Battleborn?

There are two types of way to play co-op in Battleborn: Private and Public sessions. For Private matches, players must either join or be invited to the lobby by a party leader. From there the leader can choose any of the missions he or she has unlocked. For Public sessions, players can queue for either a Random Mission or the last mission of the base game (mission 8), if they have it unlocked. In Public matches, the game will find other players until the full complement of 5 players is filled out. If a Random Mission was queued for, players vote between 3 random missions or can select "No Preference." The most popular mission will then be played.

How does save game progress work for co-op play in Battleborn?

In the campaign, missions are unlocked in sequential order and must be completed in order to unlock the next one. If you join another player's game and he/she selects a mission that another you haven't unlocked yet, you will still be able to play the mission and earn whatever rewards you acquire from playing (i.e., medals, character unlocks, XP, and gear). The missions themselves aren't really tied together in any significant way from a story perspective, so if you complete mission 6 before mission 2, you don't need to be concerned about spoilers.

If you do play and beat a mission you haven't unlocked yet, it still counts as completing that mission for the purposes of unlocking the next one. For example, let's say you've only completed up to Story Mission 3 on your own, and then join another player's game and complete Story Mission 5. When you complete Story Mission 4, either on your own or with a group, then you'll see Story Mission 6 automatically unlocks as it counts your previous victory in Story Mission 5. It's a bit confusing, but the bottom line is that unless you're hosting a Private match with friends, you don't need to worry too much about playing through the missions in numerical order.

Can I join a game if the host is further along than me in Battleborn?

Yes, you can join any mission either in a Public or Private match regardless of whether you have the same mission unlocked. Can more than one player choose the same character?

How are gear/item drops handled? Is it free-for-all or instanced?

Scattered throughout the Story Missions are boxes and containers that may contain temporary power-ups, credits, shards, experience orbs, point orbs, gear, extra lives, health, or helix orbs. Of those, the gear, shards, experience, credits, helix orbs, points, and extra lives are all shared across the team, so it doesn't matter who picks it up, the whole team benefits. The temporary power-ups are the only items that are not shared.

Temporary power-ups, gear, credits, shards... what is all that stuff? You just said a bunch of words, what do they actually do?

Yeah, there's a lot of stuff happening all at once. Here's a quick breakdown of all the items and what they do.

What does the Battleborn season pass get you?

The Battleborn Season Pass comes with 5 pieces of DLC. Each DLC pack comes with a new story mission, one hero key to instantly unlock a new hero, and unlockable skins and taunts. The new heroes will be free to all players, regardless of whether they own the DLC, but they will have to be earned through challenges. How are new characters unlocked?

Characters are unlocked one of two ways: reach a certain Command Rank, or complete a certain challenge (e.g., complete five matches as a "Rogue" character). From the "Command" screen, you can view the requirements you must meet in order to unlock a particular character.