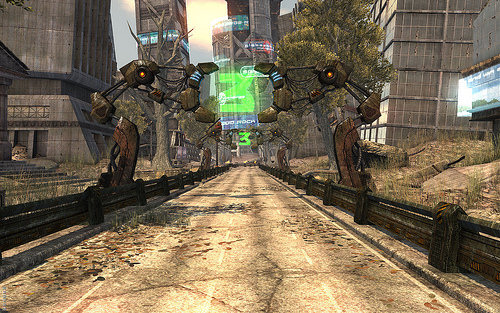 I'm a big fan of indy games, they generally offer something unique and fresh.  And every once in a while a game comes around that looks completely standout features and quality.  Project Aftershock is a multiplayer Sci-Fi racing game set in the future. Massive earthquakes were occurring all over the globe and destroyed most of earth’s major cities.

GamerdDailyNews sat down with a member of the team to talk about the game.  Up for discussion was the game's co-op mode.

How will the co-op work?

There will be 2 teams (4vs4 or 5vs5) racing each other around the track. Each team member can only carry a specific weapon which can be combined with other team member’s weapons.One of the most basic gameplay is where the winning team is determined by the average time taken by all team members so it helps if all the team members are fast. Team members will also be able to utilize traps to their advantage.

There's no release date yet for the game, but the official website has a blog tracking development progress.  We've posted a video that's a short tech demo of the game right ahead - it's impressive to say the least.