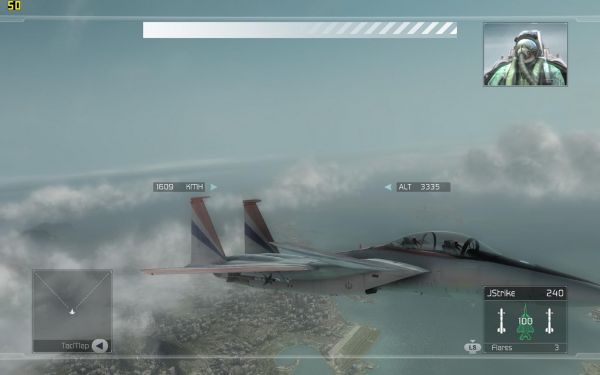 The buzz about Tom Clancy's H.A.W.X. has been going on for some time now, and it continues today with a round-up of headlines that we hadn't been able to squeeze in earlier without making you utterly sick of seeing jet fighters on the Co-Optimus front page. The above image probably doesn't help the cause...

Nevertheless! Once you've finally cooled down your afterburners and decided to give the game a rest, you can still adorn your Xbox NXE dashboard with the H.A.W.X. Premium Theme for 250 MS Points.

And when you're back on air patrol, take a gander at the incredibly detailed landscapes that were scanned by the latest and greatest $100-million GeoEye satellite. GeoEye was also heavily involved in data collection for Ace Combat 6: Fires of Liberation, but not to this extent. Isn't technology wonderful?

But the really hardcore H.A.W.X. gamers accept the coolest life-changing challenge of all...drone piloting! An 18-year-old soldier credited his ace drone piloting skills to his knack for Xbox games. After dropping out of high school and failing the initial requirements for the military unit he had intended to join, it was suggested -- and rightly so -- that he should try utilizing a drone radio controller. "Hear that, mom? There are more real-world applications to playing video games than you thought!"

The final notes of this post are in regard to your selection of aircraft in H.A.W.X... From the start you're offered a health fleet, but Ubisoft wanted to make sure you have the edge: following instructions found here and here to unlock five aircraft for free! Once you've done that, check out this Ubisoft blog post to see cool unlockable skins for your favorite planes.