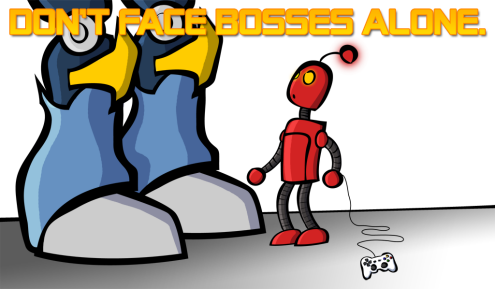 It should come as no surprise to many readers of this site that co-op gaming makes any game much better.  And not only does it make a normal game something extraordinary, it adds longevity as well as meta games to them simply by the nature of itself.  The folks over at Platform Nation have recently had the same epiphany - yes folks - co-op gaming friggin rules.

As time went on and developers realized that co-op can make almost any game better and more fun, I have found myself playing games or doing things within them that I may not have been able to do otherwise because doing them with a friend is so enjoyable. Had it not been for online co-op sessions with friends, it would have been near impossible to sit down for hours on end looking for those last few agility orbs in Crackdown. Playing through the entire career mode of FIFA Street 3, a fun but admittedly flawed game, would have been much less enjoyable without having Nick on my team to run plays and have a great time with while running through the other teams.

That's a pretty good question, would you really have spent the time to get all 500 Agility Orbs if you didn't have a friend helping you look in Crackdown?  Or having that same friend help break up the monotony by allowing you to throw a car on his head?  I think not!

Of course as we've seen over the past year, co-op gaming isn't just an added feature any more, it's the staple and essence of a game.

We have games like Army of Two, Resident Evil 5, Gears of War 2 and many others that are completely written from the ground up to support co-op play.  Platform Nation agrees

Co-operative gameplay has come so far that now that it is the building block for many big titles. From Castle Crashers to Army of Two (and its forthcoming sequel) to the upcoming Resident Evil 5, games are now featuring co-op rather than it simply being a feature. I have played through most of the RE5 campaign and, without the ability to play with someone over the Internet, I would never have made it.