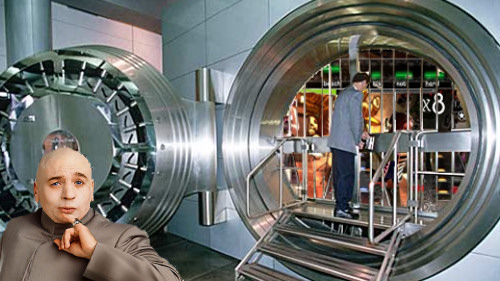 You know all those epic four player co-op Rock Band2  parties you've been having?  The ones where your friends look through that slick Rock Band store and ask to purchase this song and that song?   You know how you had to go out and buy a new plastic guitar because your buddy Frank the Tank was pissed at screwing up Green Grass and High Tides he smashed it over your coffee table?  They are the reason your wallet is empty.

All those plastic instrument and song purchases have now added up to the tune of one billion dollars.  And that's not the only impressive number from Harmonix, EA and MTV.  To date there are 614 songs available from 269 different artists.  Over 40 million songs have been downloaded since the first game's release back in 2007.

So next time your friend asks if you can buy a song off the store for your band to play - just ask - "Do you have one billion dollars?"

ROCK BAND® FRANCHISE OFFICIALLY SURPASSES $1 BILLION DOLLARS IN NORTH AMERICAN RETAIL SALES , ACCORDING TO THE NPD GROUP
OVER 40 MILLION PAID INDIVIDUAL SONGS SOLD VIA DOWNLOAD TO DATE ON ROCK BAND® PLATFORM
New York, NY – March 26, 2009 -- MTV Games, a part of Viacom’s MTV Networks, (NYSE: VIA, VIA.B), Harmonix, the leading developer of music-based games, and distribution partner Electronic Arts Inc. (NASDAQ: ERTS), today announced that the Rock Band® franchise has officially surpassed $1 billion dollars in North American retail sales in 15 months, according to The NPD Group. In addition, over 40 million paid individual songs have been sold via download through the Rock Band® platform furthering its position as the music video game leader in paid song sales and downloadable content with over 600 songs available to date in the Rock Bandcatalogue.
Originally launched on November 20, 2007, Rock Band is the multi-million unit selling, genre-defining music game platform that allowed music fans and gamers to interact with and discover music like never before by choosing guitar, drums, vocals, or bass to start a band and rock the world. Developed by Harmonix, the world’s premier music video game development company, and published by MTV Games, the Rock Band platform has had a positive impact on the overall promotion and sales of music, benefiting artists included in the game both directly through royalties associated with game sales and indirectly by causing the sale of more songs and albums.
Key Stats for the Rock Band Franchise
Sales
·         Rock Band® franchise has officially surpassed $1 billion dollars in North American retail sales in 15
months, according to the NPD Group
·         Rock Band was the #1 title of 2008 by revenue across all game genres (NPD)
Music / Downloadable Content
·         614 songs offered via the Rock Band platform, both on-disc and in-game music store, as of March 24,
2009
·         269 different artists / bands offered via Rock Band franchise as of March 24, 2009
·         Over 40 million paid songs have been sold via download since Rock Band launched on November 20,
2007
·         11 albums released to date via the Rock Band platform including AC/DC Live, The Cars, Judas Priest,
Pixies, Mötley Crüe, Foo Fighters, Red Hot Chili Peppers, Megadeth, Rush, No Doubt and Stevie
RayVaughan, as well as special compilations from The Who, Nirvana, The Grateful Dead, Boston and
more
Critical Acclaim
·         Average Metacritic score of 92  for both Rock Band and Rock Band  2
·         Rock  Band and Rock Band 2 have garnered more than 50 industry awards including:
·         IGN’s “Best Music/Rhythm Game of 2008”
·         Gamespot.com’s Editor’s Choice Winner for “Best Rhythm / Music Game of 2008”
·         Spike TV’s 2008 Video Game Award Winner for “Best Music Game” and “Best Soundtrack in a
Game”
·         Gametrailers.com “Best Music and Rhythm Game 2008”
·         PlayStation: The Official Magazine’s “Best Rhythm Game of 2008”
·         Yahoo’s “Best Party Game of the Year – 2008” and named one of Yahoo’s “Best Tech Products
of 2008”
·         G4 TV’s X-Play “Best Music Game of 2008”
·         Named as one of Entertainment Weekly’s “Entertainers of the Year 2008”
·         Called “Best party game of the year” by the Associated Press
·         Named as one of USA Today’s “Top Video Games of 2008”
·         Cited as one of MSNBC.com’s Top Video Games of 2008 and one of the Best Xbox 360 Games of
2008
·         Heralded as “hands down the best party game ever” by Time magazine and named as one of Time’s
Top Video Games of 2008
Rock Band Franchise Innovations
·         First full band music video game to hit consoles
·         First music video game to offer export of content library from disc and cross compatibility of
downloadable content (DLC) in sequel games.
·         First music video game to offer weekly downloadable content (averaging more than 3 songs per
week since its launch on November 20, 2007)
·         Lead the way for full compatibility and interoperability between competing peripherals
·         First music video game to allow for export of avatars and other game data to create real life merchandise
·         First music video game to offer full albums as downloadable content: Judas Priest’s “Screaming for
Vengeance,” released in June 2008
·         First music game to offer a new song day-and-date with its release to radio, with Mötley Crüe’s “Saints
of Los Angeles”
For more information about Rock Band, please visit www.rockband.com