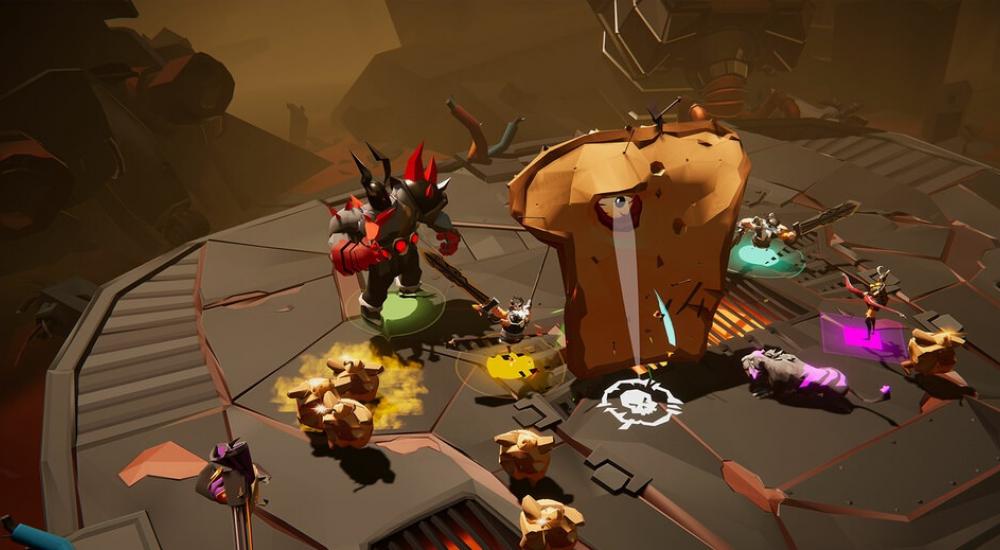 There's a new asymmetrical multiplayer game in town called Bossgard and for this week's "Let's Play Co-Op," Mike, Jason, and Nick donned their viking helmuts and viking gear to take on some killer bread! In this 1 v 5 game, 5 players take on the roles of different vikings to bring down 1 big boss. You can have humans in all of those slots, or you can do 5 humans vs 1 A.I. boss (our preference). The title is currently in Early Access on Steam and there's certainly some areas where you can see this is still a work in progress, like the balancing between the two sides, but there's certainly promise.

The core gameplay is in the twin-stick shooter vein of action where, as a viking, you'll have a special ability, an ultimate ability, and a dodge. The boss has a health bar that you'll being whittling away until it hits its second phase and you'll have to duke it out some more. The vikings have a very small amount of health in comparison but they also have a pool of lives from which they can pull in order to respawn if defeated. Once the boss is out of health, or the vikings are all dead with no more respawns, the battle is over. Things are definitely weighted towards the boss, but the vikings have a few tricks up their sleeves to give them an edge.

Those special abilities I mentioned before vary between the two different "classes" (melee and ranged) and are the only way the vikings have a chance of beating the boss. The abilities cover the broad spectrum of status ailments (poison the boss or slow them down) to buffs for your teammates. There's even one that lets you review your teammates instead of using a respawn, which pretty much feels like a necessary thing. Each of the playable characters has their own ultimate, too, so you'll need to do a little mixing and matching of all these abilities in order to beat the boss. Before a match starts, you'll be able to discuss with your teammates who's using what ability and playing as which character (players can choose to play as the same one), as well as which boss you'll be facing, and then the only thing standing between you and victory are your collective gameplaying skills.

From a co-op perspective, it's great that Bossgard supports a variety of co-op play options. You can do a local match only (all players on one PC), online, or a mix of the two (combo co-op). When setting up an online match or joining one, you'll actually be prompted to specify how many local players there are. There are also "Custom" match options where you can set things like the overall health of the vikings and the boss, how many respawns the vikings have, which vikings are available for players to choose, and more. A.I. bots can fill in for any open viking spots, too, so you don't need a full team of five. It is all setup to be as co-op friendly as possible.

That being said, there are some things about Bossgard that just don't feel great and, ultimately I believe, comes down to a matter of balancing. For instance, the time between when a boss attack is indicated and the boss attack hits can be so short that unless your reflex skills are on point to hit that dodge button immediately, you're going to get hit. That in and of itself wouldn't be so bad if it weren't for the fact that your recovery time is so long that you'll usually get hit again before you can do anything. Some bosses have attacks where it feels like there's absolutely no avoiding it and you're just going to die, which, again, from a viking player perspective is bad. I do not envy Sand Sailor Studio the task of balancing this as asymmetrical multiplayer games like this are always going to have an almost impossible task of making both sets of players (those that play as vikings and those that play the boss) happy with how their chosen side feels. Hopefully, a few months and updates from now, they'll have found something that works for most.

Bossgard is available on PC via Steam Early Access. Five player couch, online, and combo co-op are supported for playing as the vikings against an A.I. controlled boss.