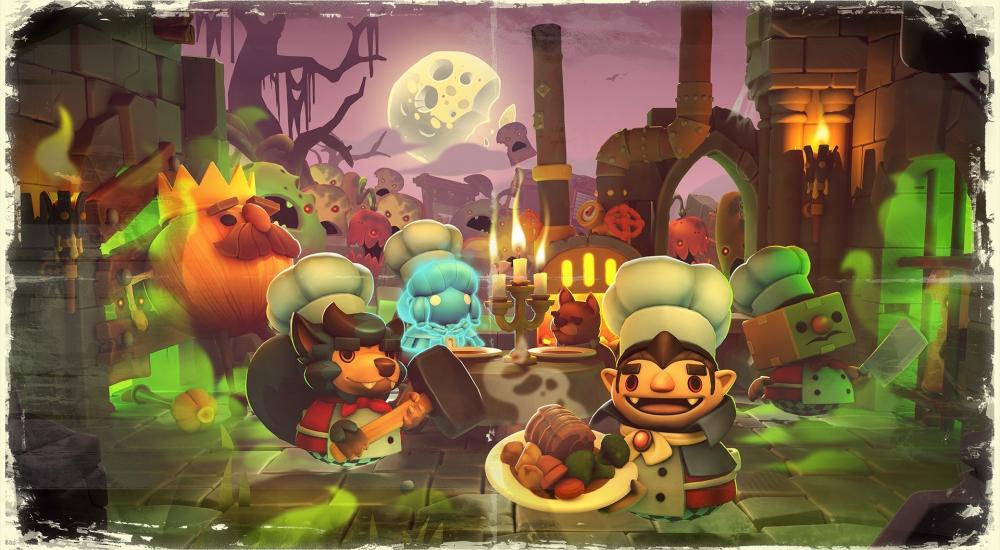 Most video games seem to view zombie hordes as obstacles to be avoided and/or destroyed, but Overcooked! 2 takes a different approach.  In developer Ghost Town Games' eyes, the Unbread are driven by hunger, so why not just feed them?

The "Night of the Hangry Horde" DLC introduces a brand new horde mode in which players must work together to feed the Unbread before their castle is overrun.  Coins will still be rewarded for each successful dish, but now players will be able to use those coins to repair the castle and unlock shortcuts around the kitchen.  Sounds like a great (and also stressful) time!

Naturally, this DLC adds new recipes, such as a guillotine-based soup and a roasted dinner.  Four new chefs join the fray as well:  the ghost, werewolf, and vampire chefs are making their first appearances, and the Boxhead chef from the original game makes their grand return.  Finally, there are new stages galore.  On top of the eight horde mode stages, the DLC adds nine creepy challenge stages and three hidden Kevin stages.

All this new content will run you $9.99 unless you own the game's season pass.  "Night of the Hangry Horde" serves as the second of three content packs included in the season pass, with the final entry to be released later this year.  Overcooked! 2 can be enjoyed in online and local co-op for up to four players on Nintendo Switch, PlayStation 4, Xbox One, and PC.