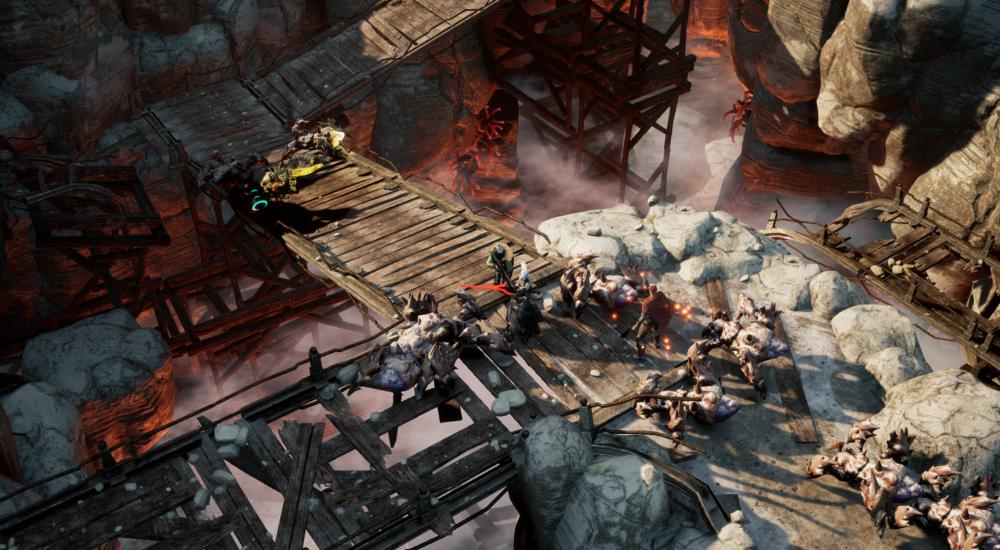 Novarama's Killsquad made its debut just ahead of this year's E3, and this week, it's hit Steam Early Access for all to play. Last week, Mike, Jason, and Nick got a little time with the title before it launched into the realm of "early access," and came away impressed.

The setup to Killsquad is fairly straightforward: you're part of a band of mercenaries (called "Killsquads") that get hired by "mega corporations" to go out to various planets around the galaxy and raid whatever resources are left. Rather than any form of overarching narrative or storyline, all you'll do is accept a "contract" that puts you on some alien world with a set objective, such as defend a particular point for a set period of time, or take out a "boss" type enemy. The contracts are randomly generated every set number of hours within the game, so you'll see new ones come and go as you play. Once you accept a contract, you'll go to the randomly generated level the game has made and make your way through an area - fighting off enemies and earning experience along the way - until you reach the objective and (ideally) complete it. You'll get some rewards and then be tossed back to the lobby to do it all again.

There are four different characters from which to choose right now, Zero, Kosmos, Cass, and Troy, with more planned as development for the game continues. While these characters fall within some general RPG stereotypes like tank, DPS, and healer, those roles aren't exactly set as characters have some flexibility with their "builds." You'll start every mission at level 1 and as you defeat enemies and earn experience, you'll level up and increase your character's stats. At every even-numbered level, you'll also be able to choose an upgrade to one of your skills. For instance, Kosmos, as the "tank," has a taunt ability that causes enemies to focus their attacks on him while also increasing his damage temporarily. At level 2, you can choose an upgrade to that ability that will also cause it to slow enemies affected by the taunt. Alternatively, you can choose an upgrade that increases the duration of his "Whirlwind" ability (he spins around a bunch doing damage in an area), thereby increasing the damage he's dealing. This allows for a lot of flexibility each time you play and lets you pick the "build" that best fits the mission you're on and the gear you have equipped.

Speaking of equipped gear, that is the main progression in the game. The weapon, Support Gear, and Prototype Gear you put on your character increase some of your selected character's stats, and also give you some new passive abilities, such as getting more experience from enemies or having a chance to inflict bleed on those foes with each attack. They also increase your "Vector" level, which is a measure of your character's overall power. The higher your Vector level, the more difficult contracts you'll be able to accept, and the better loot you'll earn as a reward.

All of that loot comes in different rarities (common, uncommon, epic, etc.), and the more rare it is, the better bonuses it provides. You also earn a currency for each mission that can be used to buy weapons or gear from a vendor between contracts. For example, if all you've been getting is weapons and you need a new Support Gear to help bump up your Vector level, you can spend some currency to get something that will be guaranteed to be at a higher Vector level than whatever you've got, though the rarity may not be as good.

It definitely has that "action-RPG grind" feeling to it, but in a way that doesn't feel too grindy. Best of all, while weapons are tied to the four specific characters, the other pieces of gear aren't. So, if you spend a lot of time playing as Kosmos and then switch to Zero, you can equip Zero with your highest Vector level Prototype and Support Gear, then buy a new weapon for him from the vendor. There are some definite issues with Killsquad in its current Early Access form (navigating menus with a controller isn't great, network disconnects, having to reinvite friends to your lobby after a mission is done), but those are all issues/bugs that will no doubt be fixed as time goes on. The most important thing is that there is a really solid foundation to Killsquad. No, it isn't a "twin-stick shooter Diablo," but I think that works better in its favor. There are a lot of "loot-shooters" out there these days, and the way this game handles progression allows for a lot more variety than in many of those. You're not "locked in" to a certain build or way of playing, and the next piece of gear you get, or contract you accept, might change things up entirely. You're also free to switch back and forth between the different characters so you don't have to go through the long grind of raising the Vector level for each one. All of that helps to engender a greater feeling of cooperation as you and your friends are free to hop in, play whoever you want, figure out strategies/builds as you go, and have a great time doing so.

Killsquad is available now via Steam Early Access and, until July 22, it's available for $20 (goes up to $25 after that). Four player online co-op is supported throughout.