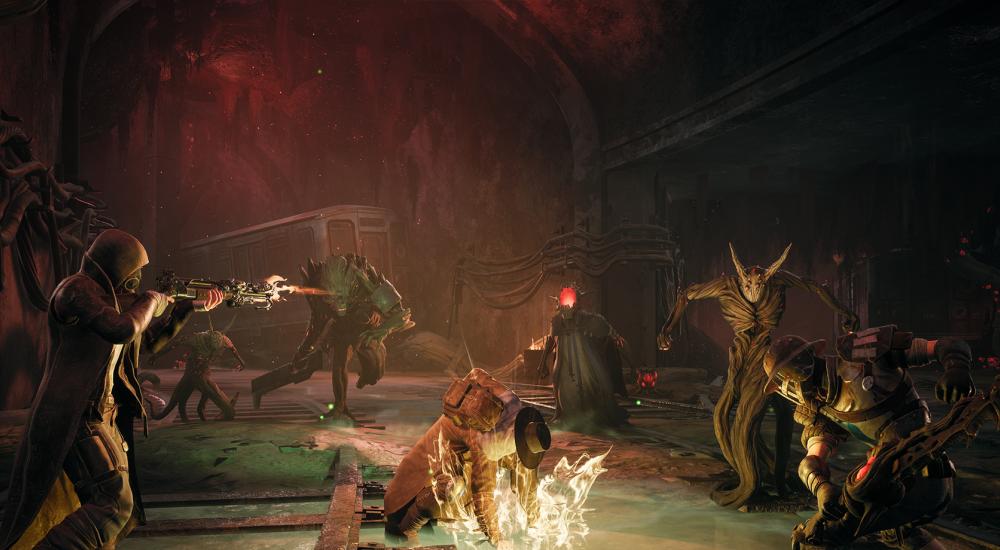 If you missed our weekly stream this week, which happened Tuesday night instead of Monday because Monday was holiday in the U.S., no worries! We've got a handy recap of all the co-op goodness from Remnant: From the Ashes, along with some impressions of the first few hours.

A quick disclaimer before going any further. Part of the joy of Remnant, much like in Dark Souls, is exploring and discovering things for yourself. If you don't want anything spoiled for you, then I'd avoid the video (for now) and just go experience the game for yourself. Locke, Mike, and myself all highly recommend it, especially in co-op, and if the idea of a "Dark Souls-like" turns you off, don't worry; Remnant is more like a third-person shooter in its minute-to-minute gameplay. The links to Dark Souls are more in how the game handles its world-building through NPC interactions, lore books, and item descriptions. Alright, all that said, let's dive in further.

Some cataclysmic event not only ruined the Earth but also ushered in a relentless foe (the Root) that is hunting down the last few survivors of humanity. Your character sets off on an unknown mission to an island with a mysterious tower. You don't make it to the tower, but you do run into a band of survivors that are attempting to hold out against the Root. They take you back to their bunker (Ward 13) and from there your journey begins. What initially starts as a quest to try and find the Founder of Ward 13 spirals into a much bigger adventure that we just start to touch upon in our stream.

There is plenty to uncover, discover, and deduce as you go, and your journey will likely be different than your friends' as the world in which you find yourself is randomly generated each time you start a new campaign. Within the context of Remnant, this means you may encounter completely new areas, new enemies and bosses, and even new NPCs. It is this element - the allure of discovering something new - that I feel is the biggest selling point for Remnant. You may have missed an NPC or a particular item in your first playthrough of Dark Souls or Bloodborne, but you could always get it the next time around because things were set. With Remnant, your second playthrough will be vastly different from your first and you'll encounter things you didn't even know were a part of the game.

For instance, the very first dungeon I went into was an utterly harrowing experience for me. I was used to fighting the tree-looking enemies found all over the outside world up to that point, but inside the dungeon, there was a new creature that looked like something out of "Critters." These little guys weren't particularly frightening, but they often appeared in larger numbers so I had to mix up my ranged and melee attacks to deal with them all.

After clearing one pack, I suddenly heard a musical sting (the game doesn't have a soundtrack outside of certain areas/moment). I wasn't sure what it meant then, but I turned around and standing about 15 feet behind me was this looming figure with what looked like a deer's skull for a head. It was draped in a white robe, wielded two long swords, and was just slowly walking towards me. The terror increased as it deflected all of my shots with its swords. I did not know what to do. Could I fight it, or was this something that I had to stay ahead of for the rest of the dungeon? Suddenly, it roared and charged at me...

I won't say what happened next, but outside of that specific dungeon in my world, I have not seen those enemies again. Mike encountered them in his, but Locke hasn't at all. Playing in Locke's game in the stream, Mike and I both encountered a boss we haven't fought before. That constant feeling of wondering "what's next" and "is this something my friend has seen/done? what did they do?" is such a strong pull, and a part of what made the Dark Souls games so popular. Gunfire Games has not only captured that feeling, but found a way to keep it going long after the credits roll.

I haven't stopped thinking about Remnant since I had that encounter I described earlier. It's been a long time (P.T.) since a game gave me that kind of scare, and it was something that I might not have even experienced at all. It was completely organic and, in a way, unique. It's made me think about all the experiences I've had in the game since. In my next playthrough (and there will be more), will I meet that NPC again? Will I have the same interactions, or did I do something in my first playthrough without even realizing it that affected the way they treated me? What things are there that I haven't seen/done? Will I find new pieces of lore that give new context to what I know/have pieced together on my own? The possibilities seem endless for now, and I am eager to explore as many as I can.

Looking back on it now, I feel like the start of Remnant was done intentionally as a way to acknowledge and then shatter ties to its obvious inspiration. Your character sets off from some unknown point to a distant island and a mysterious tower with nothing but a sword. After you move your way through the initial tutorials and combat encounters (which are somewhat deliberate in their pacing), you'll find yourself in Ward 13 with your weapon gone. Your first task is to help the residents restore power, but of course, you can't fight with just your fists. You check in with one NPC who remarks about your sword being "ancient" and is now just scrap metal, and the next NPC you talk to gives you guns. Sure, it was a way to introduce the "real" gameplay of Remnant, but it also feels like the developers were saying "time to put your notions of what a Dark Souls-like should/would be behind you." It's a risk, considering the fond feelings so many folks have for that series, but it's one that pays off handsomely.