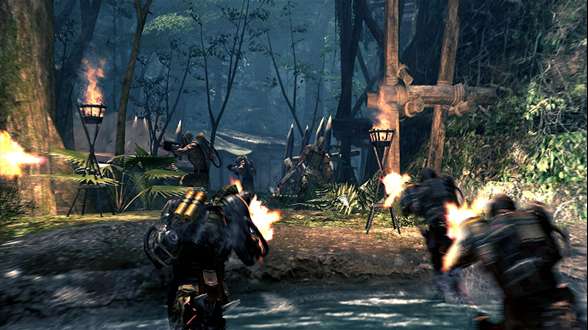 Speaking of a boss enemy known as the 'Salamander' to the folks at GamesRadar who got their hands on a Lost Planet 2 demo build, Brett Elston described the teamwork as:

Our group of four hardened Snow Pirates engaged ol’ Sally and met frequent doom despite its glaringly obvious weak points, only succeeding when we got our sh** together and coordinated attacks.

The control style of the first Lost Planet reminds me enough of the Playstation 2 SOCOM series that I so loved, and this teamwork-oriented co-op campaign that has been touted for six weeks now is giving me chills of anticipation.

Click "Read More" for another screenshot and some more quotes. The point of it all is, there’s no way one person could do this. It’s a team effort. You need to coordinate who’s doing what, who’s in the VS blasting Sally’s back, who’s running by its mouth trying to jump in, who’s hammering the legs with rockets, sending gallons of glowing orange goo in all directions. Picture the first game’s multiplayer, add bigger and louder everything, and that’s essentially what we played.

Die too much, and your team’s collective gauge will deplete rapidly, and when it’s empty, you lose for good.

Unfortunately, one bit of not-so-great news that is derived from the article is that drop-in/drop-out will not be supported, which is a feature that we tend to be impressed by.

Either way, this game is fairly high-profile, and one that we're keeping a close eye on. With the team's pedigree and attention to the community, it's a good bet that Lost Planet 2 will be a top-notch co-op venture. Hype train, move out!