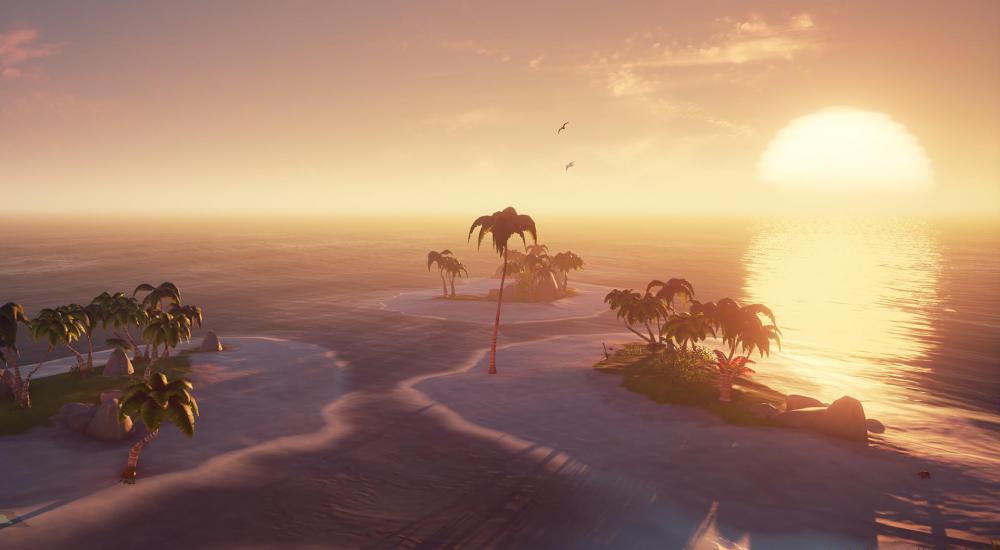 Sea of Thieves may have been around since early 2018, but Co-Optimus has more or less not been tempted by it's golden bounties. The risk of invading player pirates have turned us off of these types of games - from both a coverage and interest perspective. You'll notice the DB entries for Sea of Thieves mentions "griefing" as a piece of information. But if our first session is any indication, the risk of being ganked feels pretty low and the emergent gameplay is worth the price of admission.

I was immediately impressed with Sea of Thieves after playing the initial "Maiden Voyage." The visual quality combined with the overall style and atmosphere gave me a distinct Disney vibe. Clearly a lot of love had gone into this game and I was immediately hooked as the intro sequence panned back to reveal the title on the open seas.

But the game becomes even more impressive once you bring your pals together with what Mike called - "probably the most co-op game ever." Driving a pirate ship on the open seas is clearly not a one person job, with players having to adjust the sails, raise and lower the anchor, navigate from the crows nest or bow, and of course steer the ship. On top of that when danger comes close, you'll need to man the cannons and harpoons or fight off boarding invaders. Needless to say communication and teamwork is absolutely critical.

Locke tries to paddle a rowboat...

The undead pirates aren't happy we stole their idol.

So how did the Co-Optimus Crew do on their first job? Let's just say it sounded like a family on a roadtrip arguing in the car.  Check out our below recap as we take on a "Tall Tale" - the game's version of multi-step quests that include puzzles, combat, sailing, and exploration. And despite the family quarrels, we managed to complete the mission with a gratisfying success.

Sea of Thieves is newly out on Steam and offers cross play with the Xbox One versions of the game.