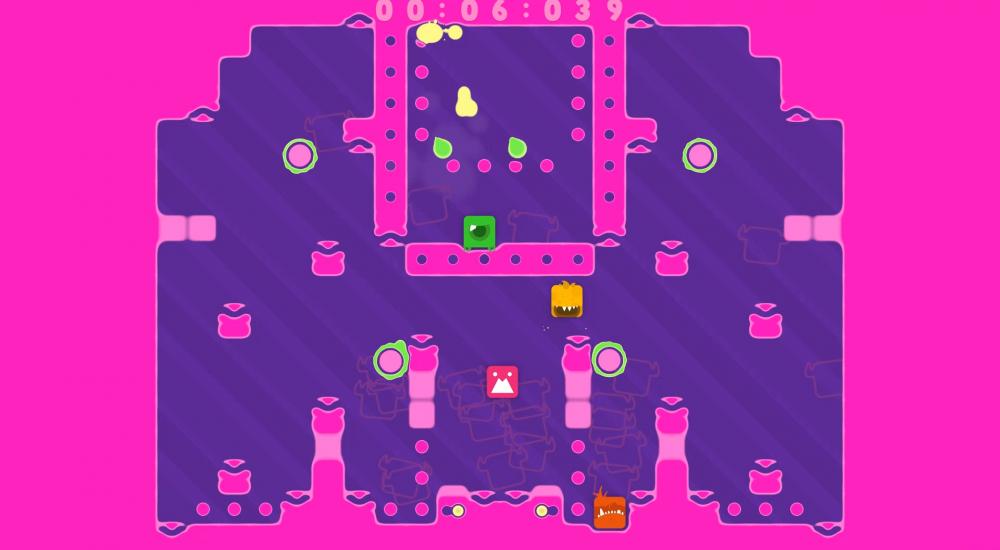 Admit it, you love to spit.  We all do.  The act of spitting is a natural use of the human body, and plus, it's so multi-functional.  What other action can simultaneously improve your oral hygiene and insult an umpire?  Starting today, the folks over at Massive Miniteam have found yet another use for the beautiful motion, which is solving arcade-style puzzles in Spitlings.

In the game, you and up to three friends assume the roles of the eponymous spitlings, flesh-y cubes with slightly unnerving mouths.  In the campaign mode, you'll work together to conquer over two hundred levels, which blend arcade action with light puzzle solving.  Alongside your main objectives, you'll have plenty of optional goals available as well, such as unlocking B-Side versions of the stages, freeing more than one hundred playable spitlings, and adding new color schemes to the game.  An arcade mode option is also available, which lets players play stages out of order and add modifiers for an even more chaotic experience.

Spitlings is built from the ground up for a co-op experience, as implied by one of its core mechanics - if any player fails a stage, then the whole team fails with them.  I can certainly see this becoming frustrating if a single player is struggling with the gameplay, but hopefully, the game is friendly enough that it won't become a sticking point.

Spitlings is out now on PC, Nintendo Switch, PlayStation 4, Xbox One, and even Google Stadia, which was its initial launch platform.  It supports local co-op for up to four players.