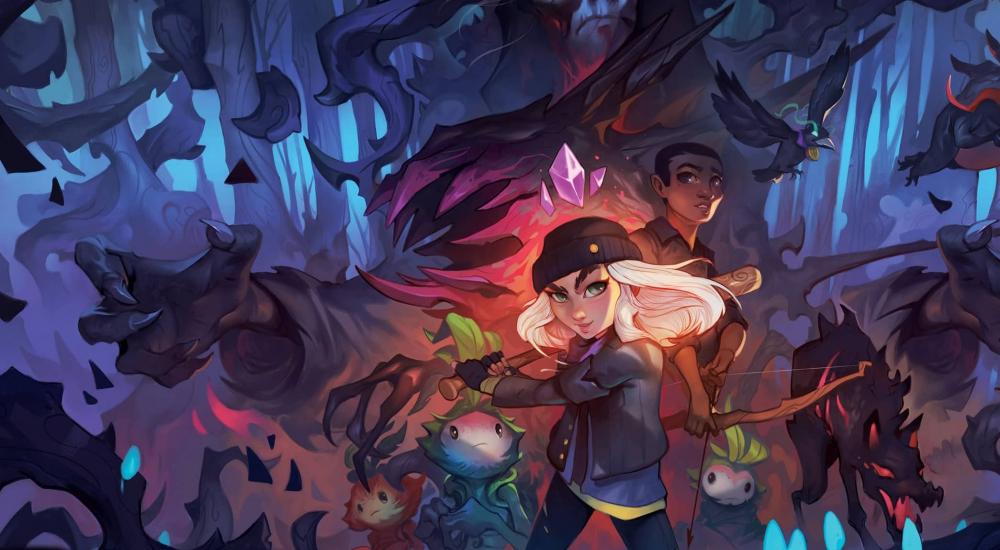 Sometimes first impressions aren't everything. On the surface Drake Hollow immediately reminded the Co-Opticrew of Fortnite's Save the World co-op mode. But after getting below the surface it was clear that Drake Hollow was less about defense and base building and more about exploration and growth.

Drake Hollow puts you in the shoes of a band of children set to save the Drake's - a mandrake like species that require entertainment, food, and mysterious crystals in order to survive. You'll be defending them against the feral monsters of the world all the while collecting supplies to build up your campsite to helps the drakes flourish.

While your camp and its island is the main focus off the get go, it's the game's procedurally generated map  that requires careful exploration to find the required supplies needed to grow your home. The world is large and while at first you'll carefully traverse through poisonous fog, it won't be long until you build a network of glowing purpose wires to grind from island to island. This network not only serves as a method to method of transportation, but a way to send supplies back to your camp.

What stands out though most about Drake Hollow is the sheer charm of the game. Everyone in the crew got vibes of Viva Pinata with the drakes. These cute little creatures show a lot of character as you interact with them during your game. Build a yoga ball for them and watch them bounce with joy. Walk on a fence and watch them try to mimic you. Their personality drives you to continue building your camp to satisfy their needs.

If there's a downside to the game the co-op mode doesn't seem to offer guest players much outside of the experience of playing. There's no bringing items back to your own game or a way to progress your own camps. You'll still earn achievements and such but co-op is meant to be enjoyed with a consistent set of players.

Check out our recap below to really get a feel of what Drake Hollow has to offer. The charming game surprised all four of us and we definitely recommend you give it a chance on PC or Xbox One.