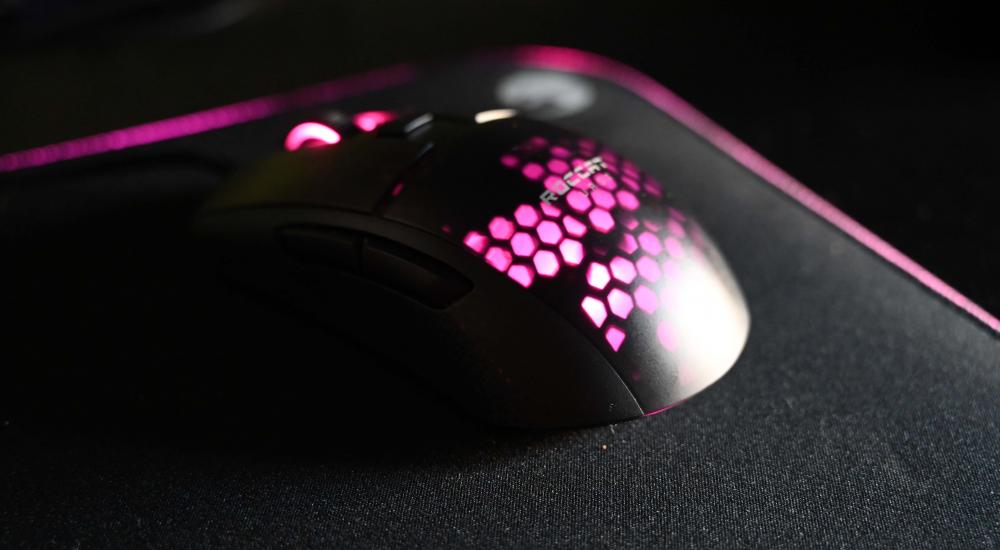 Following up on our review of the ROCCAT Vulkan TKL Pro comes the other piece of recent gaming hardware, the Burst Pro gaming mouse. The weight of a gaming mouse has always been one of the most controversial features, while in the past gamers tended towards heavier more stable mice, the new trend is as light as possible. To that end we've seen some cheese grater style plastic mice that just look downright uncomfortable. ROCCAT's Burst Pro though has a unique solution, providing a thick comfortable covering on top of the honeycomb pattern underneath. But it's not just the weighting of the Burst Pro that is different. The same optical switches found in the Vulkan Pro lineup of keyboards are utilized for the mouse buttons yielding one of the most satisfying clicks I've felt in a long while in a mouse. The optical sensor on the mouse itself is rated up to 16000 DPI with polling rates up to 1000Hz. Utilizing ROCAT's Swarm software you can configure distance control and calibration, angle snapping, and even add various types of feedback to actions. Finally you can configure all 8 of the buttons to your liking.

I've been using the Burst Pro in a variety of games: Destiny 2, DOOM Eternal, Sea of Thieves, XCOM: Chimera Squad, and more recently Call of Duty: Black Ops Cold War. There isn't much to say other than I always felt in control, never fought the mouse, and movement and feedback was smooth and solid all the way around. If I had one gripe it would be the mouse is slightly on the smaller side, so for someone with larger hands like myself I got a bit of fatigue after extended sessions. The mouse was sitting on the ROCCAT Sense AIMO XXL surface which is a 900MM wide gaming mousepad with LED illumination. The entire thing syncs up with the Vulkan Pro and Burst for one seamless LED rave experience on your desk. The surface is comfortable to game on, is soft to the touch, and really brings my desk together. One thing I do worry about over time though is how the LED light strip is attached, with thin thread like stitching. Time will tell on that one.

Like my other recent ROCCAT review, I'm incredibly impressed with the quality of these devices. We had checked out early ROCCAT gear 4 or 5 years back and things have come a LONG way since then. If you are looking for a lightweight mouse with decent precision and a light weight driver set - the ROCCAT Burst Pro is likely for you. Best of all it's priced at a reasonable $59.99 and available now on Amazon.