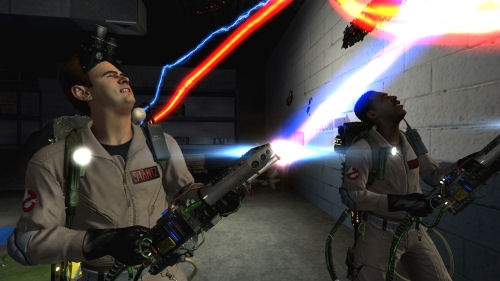 As of this article, the Ghostbusters Slimer Edition pre-order being offered by Amazon.com is selling faster than you can dial 555-2368.

That's impressive! (Thanks to ProtonCharging.com for the heads-up.)  If you are interested in snagging any edition from Amazon, they've announced release date delivery for the game.  In fact, right now all the versions are $4 cheaper on Amazon - so preorder away!

So why are we not really surprised? We're nostalgic, for one. Another reason is the plethora of positive previews flowing in. Click "Read More" to read excerpts from the latest Wii version preview by NintendoDPad.com... While Ghostbusters for Wii will not have online multiplayer, it does have a feature that the other versions are lacking that makes it very attractive: campaign co-op.  If there was ever a film franchise that lent itself to co-op gameplay, it would have to be Ghostbusters.  The Wii version of the game has a male and female rookie that you can choose from.  What is great about the Wii version is that you can have a buddy drop in at anytime to play as the other rookie (i.e. if you’re the male rookie, your buddy will play as the female rookie).  We see potential for co-op greatness here.

Wait a sec...did he just confirm drop-in/drop-out? Why, yes, I think he did!

Fans will notice more nods to Ghostbusters cartoons in this version...as Janine bares a closer resemblance to her counterpart in “The Real Ghostbusters” cartoon than her movie one.  While there have only been few actual videos of the Wii version, this art style does look especially good in motion and we look forward to seeing it more.  Finally Dr. Ray Stantz himself, Dan Aykroyd, has said that he prefers the visual style of the Wii version.  If it’s good enough for him, it’s good enough for us!

Boooring! Go back to the part where we get a drop-in/drop-out co-op campaign!

In seriousness: go read the full preview. It has some good things to say about the motion controls and the story as well. You can click here or on the "Source" link.