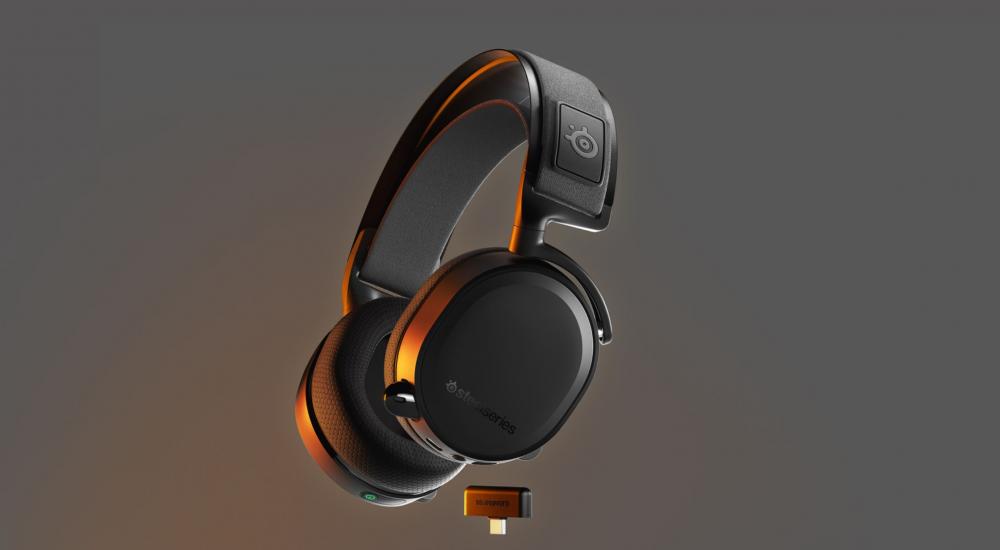 The SteelSeries Arctis 7 headset was one of the best selling and best reviewed headsets of 2017. It featured a no frills design simply packed with features and quality. So how did SteelSeries go and improve on it? By packing even more features into the $170 headset.

First up is an upgraded battery with USB-C support. Now sporting 30 hours of battery life, USB-C charging, and 15 minute quick charging capability the headset feels more modern and in-tune with features you'd expect. In my testing I was getting around 25-26 hours before a low battery warning hit. Not only does the headset itself support USB-C charging but the dongle used to connect to whatever device you want to use the headset with is now a flat USB-C style dongle. The downside of this design is it tends to cover USB ports that are next to the device on either laptops or desktops - thankfully there's an extension cable included. From a comfort and build quality perspective the SteelSeries Arctis 7+ are top notch. The soft foam padding on the ears are light, but do an adequate job of isolating outside noises. While the device is mostly plastic, it's solid, and the headband has a metal insert making it more stable.

On the left ear cup you'll find most controls and the collapsable microphone. There's also a standard 3.5mm jack if you want to hook the device up to something that doesn't support wireless. On the right side you have what I consider the best feature - a chat and game balance dial. With this you can adjust the volume balance between in game audio and voice chat over Discord or another service with your friends. There's a nice solid "click" when things are perfectly balanced, and then either direction will favor game or chat.

The one downside of this feature is it only works with certain devices. Basically a PC with the Sonar software installed, a PlayStation 5, or an Android mobile device. Xbox, PlayStation 4, Switch, and Oculus Quest user will not be able to use the ChatMix feature.

In terms of overall sound and microphone quality the Arctis 7+ are fairly decent when compared to the ROCCAT Syn Pro Air, but I think I give the edge to out of the box sound to the ROCCATs. I still think the best sounding wireless headset I've found on PC are the Turtle Beach Stealth 700. But SteelSeries Sonar Software allows a ton of customization to the equalizer letting you dial in global and per game settings to your heart's desire.

I played Dying Light 2 pretty extensively with the Arctis 7+, and it does a fairly good job of recreating the spatial audio. I did find that at times it felt like things has a bit too much echo. Perhaps the most standout game I used was the PC port of God of War which accurately recreated dialog, combat felt as if it packed a punch with deep bass, and the game's soundtrack was able to standout from the on screen chaos quite well. All in all I think the SteelSeries Arctis 7+ are a great addition if you are looking for a pair of headsets that will work across multiple devices with quick, relative ease. I was able to swap the USB-C dongle from my PC to my android device and the headset just kept working no problem. The audio quality is top tier and always subjective, but I think as a gamer you'll be extremely satisfied.