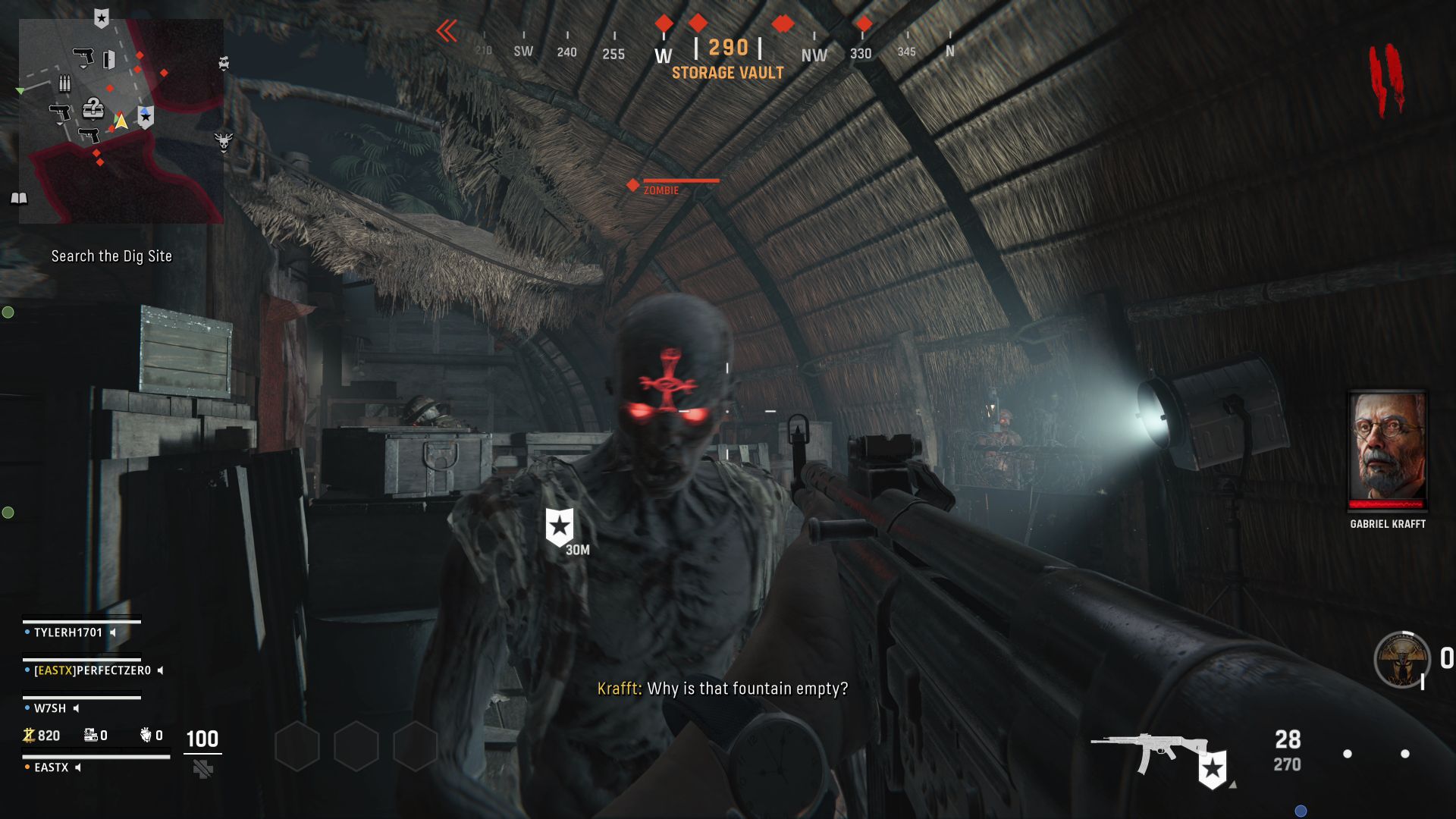 For cooperatively-minded folks like us, Zombies mode is usually the highlight of any Call of Duty game. That certainly holds true for Call of Duty: Vanguard, which has the series' best Zombies mode in recent memory. Things got even better this week thanks to the deployment of "Shi No Numa," Vanguard's third Zombies map (and a returning favorite from past games). We spent a couple of hours in the deadly swamp-based map and had a bloody good time.

"Shi no Zuma" means Death's Swamp. It does indeed take place at a swamp outpost complete with features like a two-story starting building surrounded by fences, a fishing hut, waste-high water, bridges, and even a huge pit surrounded by the equipment of nefarious scientists. Read the official Call of Duty blog post to learn more about the map's features. The new map comes from Treyarch as part of Vanguard's "Mercenaries of Fortune" season. Activision describes it as the first traditional round-based Zombies map for Vanguard. "Shi no Zuma" is the game's third Zombies map, though, so what does that mean? Well, the first two maps are actually open-world experiences that don't rely on a round-based structure. The team of players simply moves to different portals or points on the map and completes objectives. After completing enough goals, the team can call for extraction and get the heck out of there. These types of maps are really fun and can actually be completed by normal people!

"Shi no Numa," on the other hand, plays more like the Zombies maps of past CoDs. The heroes must face increasingly difficult waves of undead unfriendlies while attempting to complete slightly more obscure objectives on the map. Money earned from felling foes can be spent to unlock new paths, purchase upgrades from demonic altars, or buy weapon upgrades at the appropriate station. Enemies occasionally drop hearts that can be spent at an alter to buy Roguelike-style perks. Just don't get so bogged down with saving up for upgrades that you forget about the mission objectives, because the harder waves of baddies will quickly put an end to many players' runs. Even though "Shi no Numa" has a wave-based structure and a less open-world map, our team still greatly enjoyed it. Vanguard's upgrade systems are intuitive and fun, always adding a welcome element of customization that's easy to understand. Players can still call for extraction to complete the map, too; you just have to do it on the tenth wave. After reaching the radio and calling for extraction, the team will be surrounded by deadlier enemies like Gatling gun-wielding zombies and floating, magic-wielding ones. If everyone can manage to fend those heavies off and make a mad dash to the extraction point, the team will win. It took us several tries, but we pulled it off eventually.

Call of Duty: Vanguard sells for $69.99 on Xbox and PlayStation (you'll want to buy the Cross-Gen Bundle). The PC version regularly costs $59.99 but is currently on sale for less at Battle.net.