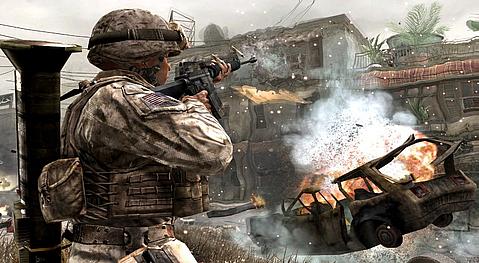 IGN broke the news one year ago that the solitary Call of Duty 4: Modern Warfare map pack had registered over one million downloads in less than ten days, on Xbox Live alone. To this day, it remains the highest downloaded item on the Xbox Live Marketplace and Playstation Network.

Last week, we received a notice that Map Pack 1 for Call of Duty: World at War had reached the two million combined download milestone (XBLM and PSN), which is no small feat in and of itself.

Naturally, information like this fuels sequels and further downloads (and in fact, Map Pack 2 for World at War is forthcoming)...in this case, a rumor has surfaced that has Call of Duty 7 officially on the blogs -- before the sixth (Modern Warfare 2) is even fully revealed.

According to a source considered "reliable", That Videogame Blog reported (via 1UP.com) that Call of Duty 7 -- following Infinity Ward's Modern Warfare 2 -- will take place in Vietnam and other locales relevant to that time period.

Furthermore, the source claimed that Treyarch's Noah Heller is directly involved, meaning that the classic Call of Duty switch-off between Infinity Ward and Treyarch might still be in effect.

As thin as this rumor is, That Videogame Blog reinforced it by pulling the story, apparently to placate their source and a sudden request to pull the story.

As much as I enjoy each title in the series for its respective worth, this rumor is underwhelming to me in light of Modern Warfare 2. If the rumor has any truth to it whatsoever, it was whispered with the worst possible timing, in my opinion.

What do you think? If four-player co-op is going to be a new standard for Call of Duty titles, does a Vietnam-era shooter from Treyarch sound interesting to you?

You can see Treyarch's boastful (and rightly so) World at War release below.

TO DOMINATE WITH MORE THAN TWO MILLION DOWNLOADS

Santa Monica, CA – May 5, 2009 – The juggernaut that is Call of Duty®: World at War Map Pack 1continues to roll, with Activision Publishing, Inc. (Nasdaq: ATVI) and developer Treyarch announcing today that worldwide sales for the downloadable map pack have cleared the two million download mark, on both Xbox LIVE and the PlayStation Network (combined).

“This is a huge milestone and we are so appreciative of our incredibly supportive community who continue to play and enjoy the game,” said Mark Lamia, Studio Head of Treyarch.  “We’re hard at work on Call of Duty: World at War Map Pack 2 and look forward to delivering that in June.”

Call of Duty: World at War Map Pack 1 contains four maps (Nightfire, Station, Knee Deep and Verrückt) and is available on Xbox LIVE® Marketplace for the Xbox 360 video game and entertainment system from Microsoft for 800 Microsoft Points and on the PlayStation®Store for the PLAYSTATION 3 computer entertainment system for $9.99. Call of Duty: World at War is rated “M” (Mature) by the ESRB for Intense Violence, Strong Language, Blood and Gore.

For more information and exclusive updates about Call of Duty: World at War, visitwww.callofduty.com.

UPDATE: FirstShowing.net is reporting another rumor -- the Call of Duty franchise is possibly being pimped out to Hollywood in movie form.