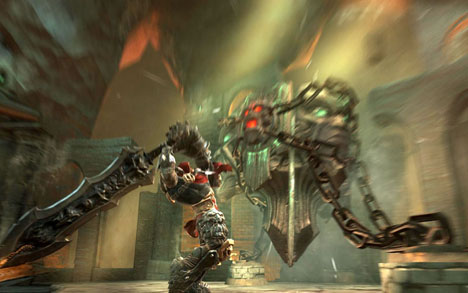 During development, it was planned to base the game around all four Horseman of the Apocalypse in a 4-player-co-op setting. Unfortunately the project got a little out of hand for Vigil games, and many points in the game were scrapped to tone things down a little bit. What were the casualties of the Darksiders: Wrath of War scraping process? According to Darksiders: Wrath of War creative director, Joe Madureira:

"A lot. The concept of the game started out as a four player co-op game where you could pick whichever horseman you wanted. So it got trimmed down from there, so you can imagine the original list was completely insane. The game we have now is a lot more focused and a lot more sane for a studio putting out their first game."

Fortunately, THQ and Vigil Games are hoping to implement many of the points left out in a sequel, should the Darksiders release be successful. Our recipe for success always includes Co-op, and with Four possible Horseman of the Apocalypse, it is a crime to leave it out.

Thanks to Joystiq for showing us how cool this game is. Still would have been better co-op!