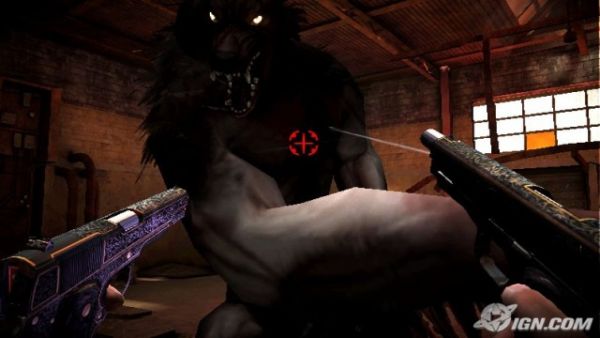 If there is any one thing the Wii needs more of, it's gore - I mean, co-op. From the developers of the beautiful, yet puzzlingly co-op-free shooter Conduit, we get The Grinder. A game chock full of Vampires, werewolves, and many other nightmare monsters to blow to pieces using the Wii remotes light-gun style gameplay. Not only will this gorefest shooter have co-op, but it will be online supported 4 player co-op. What do you think of when we mention fast paced 4 player co-op with scary things? Yea, we thought so too. High Voltage's Chief Creative Officer, Eric Nofsinger confirms an interesting Xbox parallel.

"I can't tell you how excited we are to be sharing The Grinder with you! We've been playing a lot of Left 4 Dead and there really isn't that kind of frantic cooperative experience on the Wii right now. There's certainly nothing that takes advantage of the Wii hardware the way we are able to with our engine. One thing that we learned from working on the Hunter series is that we'd prefer to feel like badasses who are suiting up to go out and slay monsters. This opens up all sorts of possibilities for enemies, weapons, characters and story."


Bringing this type of frantic survival co-op to the Wii is a very bold move indeed, one we can't wait to test drive! IGN has the rest of the scoop on what this game hopes to accomplish with Wii users, and Left 4 Dead fans alike. Expect this game to start showing its fangs for a Holiday 2010 release!