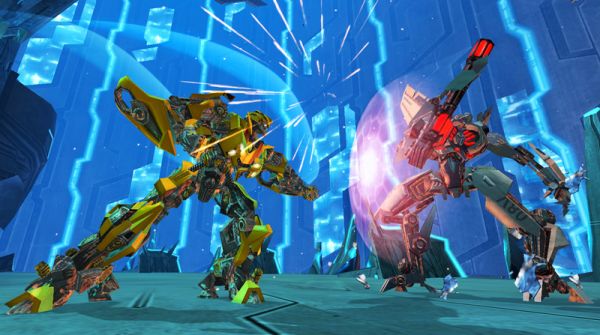 It's summer, and that means the video games shelves are filling with blockbuster movie tie ins.  The highly anticipated Transformers sequel, Revenge of the Fallen, is coming next month, and the games are due on the 23rd for all modern systems.  Right now, it appears that the Xbox 360 and PS3 version will not have co-op, but that's not true of the Wii/PS2 version.  Unfortunately, Tformers.com had some hands on time with that co-op, and was unimpressed.

Co-Op brings a “drone” into play. This drone hovers above the characters head firing a constant stream of blaster fire, with optional healing, area attack, and laser special moves, fed by an attack meter. The drone is controlled simply by placing a reticule over the desired target and firing. This largely makes the first player superfluous, except as a decoy...

Imagine playing Super Mario Bros. with the Zapper plugged in and able to blast enemies off the screen. Player two is at a shooting gallery, and player one is out for a quiet stroll in the mushroom kingdom. That’s pretty much what we’re up against here.

It sounds as if developer Krome was inspired by Super Mario Galaxy, or even the recent Monsters vs. Aliens.  It's not the best way to play with a friend, but it beats just watching.  At least the stylized art style looks impressive.  I'm still holding out hope that the Xbox 360/PS3 version of Revenge of the Fallen will include some form of co-op, maybe comp stomping, at least.