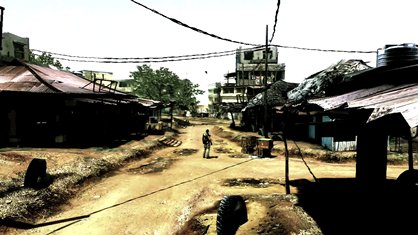 Every once and a while we get a nice surprise announcement.  Today that comes from this GamesRadar preview of Resident Evil 5.  So what's the surprise?  How about the fact that a franchise that has been traditionally single player and about lone survival will add full featured cooperative play!  Yup - drop-in/drop-out support, full integration of the 2nd character into the story, and all playable online with the AI taking over if your buddy runs away from the game in terror.

While the second player will take control of a female mercenary,  the first player takes the role of Resident Evil veteran Chris.  Even though the game is set in the dust washed villages of Africa, there will be playable flashbacks in a variety of locations of the past 10 years as you uncover the origin of the Umbrella Corporation's virus.  The game promises some pretty huge additions to the franchise: bigger and better weapons, open spaces, and a long overdue cover system.

Be on the lookout for this one early next year on both the Xbox 360 and Playstation 3.

Update: The article has been pulled, but we are still pretty confident on the information.  It looks like GR may have jumped the gun.