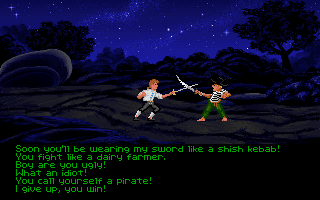 If the above image brings a smile to your face, chances are you are a fan of Ron Gilbert's work.  Creator of the popular Monkey Island series, Maniac Mansion game, as well as the original Sam and Max;  Ron Gilbert is credited in over 25 popular video game titles.  He's even credited in the very co-op friendly Diablo II.

Ron is currently a creative director at Hothead Games, but is taking a bit of a vacation this fall to deliver the keynote address at the Penny-Arcade Expo.

The Secret of Monkey Island: Special Edition should hit the Xbox Live Arcade later this year.  We'll have more PAX 2009 coverage for you as well come early September.