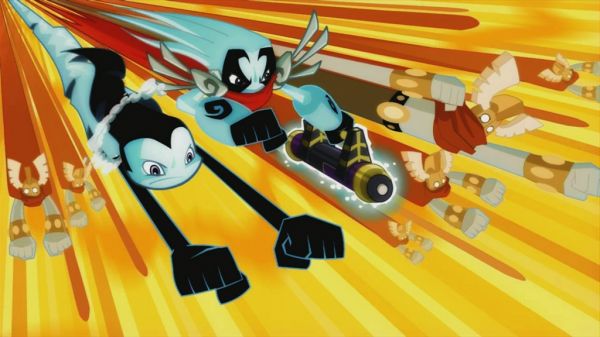 As I can reasonably attest, Video games and tornados are a surprisingly decent match. Konami must have caught on somewhere along the line, taking the once named Zephyr and renaming it Tornado Outbreak to better illustrate the point of the game. In Tornado Outbreak you'll have two leader characters to choose from, loyally backed-up by their band of Wind Warriors.

"Harness the power of a raging tornado as you tear through open environments, chewing up the landscape and spitting out everything in your path. Tornado Outbreaks revolutionary new game mechanic puts some of the Earth's most powerful elements in your hands."

The Wind Warriors are a elite team of warriors, who venture out to back up their leaders wishes. Zephyr, the leader of the Wind Warriors with the ability to transform himself into a raging tornado. Nimbus, second in command to Zephyr, has the technological know-how to support the team while providing decent cloud cover to their actions. Omegaton, a once all-powerful being, has convinced the Wind Warriors to do his bidding - the story may reveal that Omegaton is not all that he claims to be. Disguised as restoring balance to the Earths natural forces, you'll be "collecting" different Elementals to gain power!

Important characters in the game will be the relatively docile Water Whirls who (once collected) aid Zephyr with the ability to crush things under tidal-wave strength, and travel long distances very quickly. On the other end of the spectrum there are mischievous Fire Fliers, who posses a destructive power that Zephyr needs to harness in order to fulfill the Wind Warriors mission.