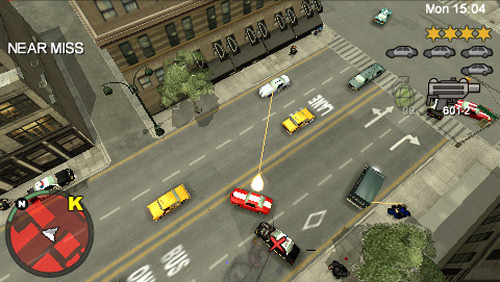 Earlier this year Rockstar Games released GTA: Chinatown Wars on the Nintendo DS.  Now several months later, they are bringing it back to the PSP, a system which housed to previous 3D GTAs.  Instead of changing things up, the game is more of a directors cut version of the game.  New hi-res graphics, additional missions, and a few other tweaks look to make this a solid port.

The touch screen was such an integral part of the DS version many wonder how it will work on the PSP.  It's simple really - the game brings up a picture in picture view and replaces stylus swipes with analog stick movements.  I got a chance to check out the car jacking and it was fairly easy; rotate the analog stick to unscrew the panel, and then hold the left and right bumpers to join the wires.  That's it.  In fact, I'd say I prefer this control method because you constantly aren't looking for a place to store the stylus while playing.

Graphically the game is a HUGE step up.  Everything looks crisp and vibrant with no pixelated edges.  Ambient and bloom lighting has been added to things like headlights and street lamps.

If there's one downside to the PSP version it's the quick access you have to data like the GPS, Email, and other functions which normally sat on the other screen.  Instead it's been replaced with a XMB style menu that you'll have to pause to access.  Not a big deal, but it is a minor sacrifice.

All the multi-player features will be returning, including the short co-op mode.  Sadly - as of now - there's no additional cooperative options.

Is there enough here to warrant a pickup if you played through the DS version?  Perhaps.  Just looking at the game on the PSP's hi-res screen made me want to pick it up and play again.  We'll see what happens when the game hits this October.