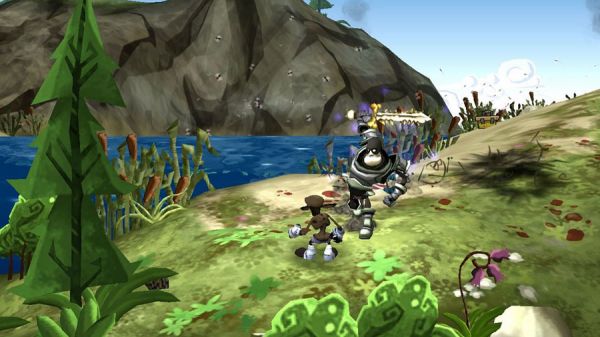 While I didn't get any hands-on time with Deathspank, the good people of Hothead games gave a nice presentation for the upcoming title. It was described as being a mashup of Monkey Island meets Diablo, which I'm sure interests some of our group.   Official PR material for the game states 2 player local co-op, but details are scarce.

He's called the dispenser of justice, the vanquisher of evil, and the hero to the downtrodden (No, really, it says that on the website) but he's better known as Deathspank. With the demonstration at PAX, Hothead games producer played through a short portion showing off the 2D/3D art style reminiscent of Monkey Island, teleportation features, a few scuffles with baddies using the "Cleaver of cleaving," and some hysterical cut scenes.

Deathspank will roam the countryside, deal with generic bad guys, and upon his untimely death - respawn in the last outhouse he visited. When exploring he found the Orq's camp, where it was pointed out how original the game is, because Orq (ork) is spelled with a 'q' making it wholly original. A lot of this type of humor (and the previously mentioned toilet humor) was rampant through this demonstration, and we fully condone it, even if it doesn't have co-op.

Ron Gilbert, the madman behind Monkey Island has unloaded his genius in to Deathspank, and it shows. After this trailer, you'll see it, too.