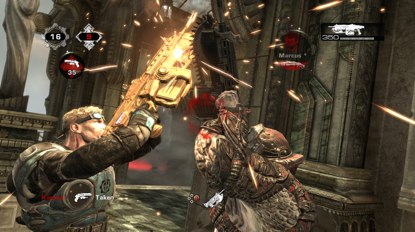 Sounds like Epic is *ahem* GEARING up for a fun Halloween.  The Gears of War 2 "All Hallow's Eve" event begins Friday morning, and will likely keep you glued to your Xbox 360 all weekend.  The fifth title update for the game is available today, fixing some bugs and exploits.  This weekend, XP earned in competitive multiplayer (the tricks) and Horde mode (the treats) will be doubled, allowing you to earn those achievements and the respect of your peers just that much faster.

Horde mode won't be the same ol' thing, though.  How does "more Boomers" strike you?

Beyond that though we wanted to mess with the waves in Horde to try and make it appropriately "scary" for Halloween. So while Butchers seemed on target for the theme, they didn't provide enough umph to make it scary. So we thought, what if any of the many Boomers could attack on any wave and when possible, a full Boomer squad consisting of Grinders, Butchers, Flame Boomers and regular Boomshot Boomers could appear and attack all at once. And of course waves 10, 20, 30, 40 and 50 would be nothing but wave after wave of Boomers. Sounds scary and fun to me!

Making things even more difficult, Maulers are being removed.  This means no more steady supply of shields to hold off the Boomers.  Yeah, that's pretty scary!  I'll be hearing "BOOM!" in my nightmares for weeks.

The following fixes and improvements are included in Title Update 5.


Title Update 5 fixes these possible exploits, where under certain circumstances: Title Update 5 also fixes a number of other, lesser-known exploits.