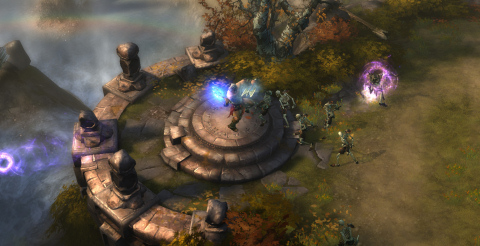 We've been pretty excited about Diablo around here, and when Diablo 3 was announced our excite-o-meter went into overdrive.  Now that the Blizzard invitational is over the information is starting to come together as to just what the 3rd journey into hell will contain.  MTV's Multiplayer Blog has some of the high points.

Diablo has always been about its random dungeons, and Diablo 3 will contain the same.  But what the new game will also contain is random quests.  Talk about infinte replayability.  The new game also promises for more large scale battles with more powerful heroes and unique characters.  Of course all of this leads to one thing...co-op.

As in the past, the game will focus on co-op play but with the new version of BattleNET premiering with Starcraft II, the communication and connection between players will be easier and able to support more massive co-op battles.  Currently it's been announced that co-op is up to five players, but perhaps that will change.  Another great change for co-op is a group loot system, so each player gets their own version of the loot when killing monsters and bosses.

It looks like there's lots of improvements for Diablo 3 on the way, with promises of betteer controls, inventory and story.  We may be waiting a while though as I've heard we might not see the game till 2010!   For now I've gone back and started to play Diablo 2 again, anyone care to join me for some co-op on BattleNET?

Hit the "Read More" link for some new screens of the game.