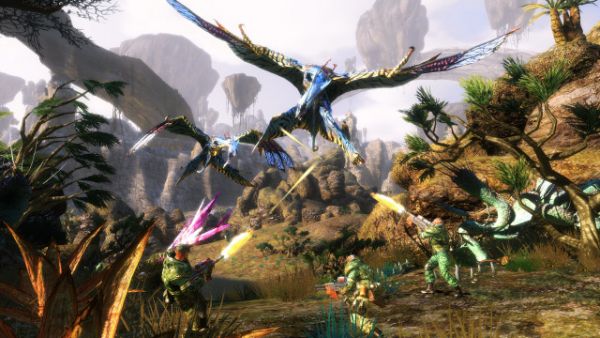 James Cameron's Avatar is supposed to be one of the biggest movie releases this winter.  The concept of the film from the beginning was to create it side by side with the video game.  As December 1st rolls near, more information is beginning to be unveiled about the game.

Jason brought you some hands on impressions with the next-gen version of the game,  and seemed to enjoy the fiery goodness it had to offer.  He was sad though to hear that in all that action on the screen, we wouldn't be able to share it with friends.  Sadly, it looks like the rep was mistaken on one account anyway as previews have started to pop up for the Wii version of the game, and it appears to have a 2 player drop-in co-op mode.

But as with all good things, if not implemented correctly it may not even be worth the effort.  Kotaku tried some co-op and found it a bit frustrating.  Why?  The camera.

Co-op Is Painful On The Ground: Rather than splitting the screen, the co-op in Avatar orients to one player and keeps both on the screen at all times. In ground-based levels, this is tedious if your partner keeps messing up jumping puzzles, or if you're trying to aim a ranged weapon somewhere farther along the path of the linear level. Also, there's an unfortunately bug where the camera gets confused about which player is the leader made it even worse.

I'm sure the bug can be fixed, but visions of Fable 2's atrocious co-op camera dance in my head.  The game is out on the Wii, along with the movie, on December 1st.