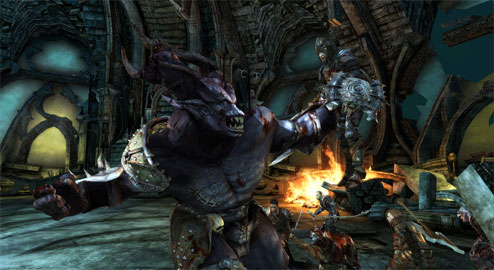 In a recent interview with Videogamer.com, Mass Effect and Dragon Age developer Bioware had offered the possibility of co-op in future games. Western RPG's are becoming more interesting with co-op, mimicking the popularity of MMO's in a controlled environment. We are already well aware that they support social gaming, so this would be the next logical step to us. When asked about the possibility of co-op in future titles, BioWare co-founder and CEO Dr. Ray Muzyka replied:

"Sure, we would consider it. We haven't announced anything on that front yet, but those are interesting ideas. They could make a great gameplay experience. Whether we'll do them or not remains to be decided."

He also warns that co-op may take away from the experience, so they'd have to be careful about how they execute co-op to preserve some of our favorites. Of course, nothing is official at this point, but we always like to imagine co-op makes things better. What about you guys? Would co-op in Dragon Age or Mass Effect diminish the experience, or do you think Bioware could pull it off?

Editor's Note:  Be sure to check out our interview with Dr. Greg Zeschuk and Mac Walters on Dragon Age Origins and Mass Effect respectively.  They give some more insight into the co-op decisions on these games, or lack there of.