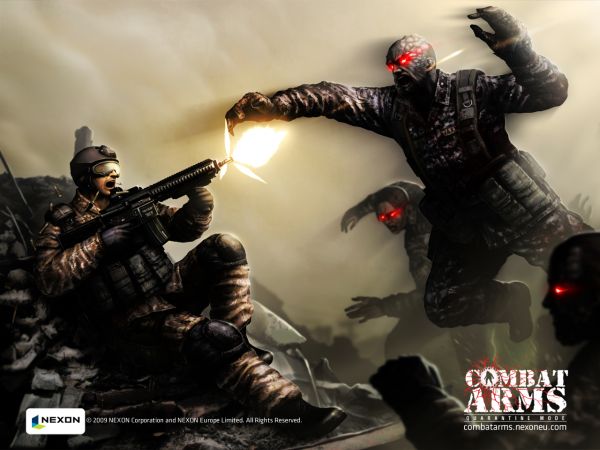 What could be better than killing zombies?  How about killing zombies... for free?  You'll recall our recent coverage of free online FPS Combat Arms.  Over the holidays, a new map called "Cabin Fever" was released, featuring the survival style of gameplay that has become so popular.  Almost half a million matches later, 278 million zombies have met their doom (for the second time, I suppose).  If your wallet is light after all the holiday spending, you might want to check out Combat Arms for your zombie slaying fix.

Here's some footage of a few of those zombies dying.

It’s been two weeks since Nexon America released the new Cabin Fever game mode in its multiplayer online first-person shooter Combat Arms, and there has been more than 452,000 matches played with 278 million marauding zombies wiped out. Cabin Fever, a cooperative, team-based mode drops players into an abandoned building where they’re beset by brain-thirsty zombies.

The enormous number of games played during the first week - 1,300 matches played every hour, have taken a toll on the heroic soldiers fending off the infected, with more than 4.4 million deaths at the bloody hands of the undead hordes. The infected zombies don't come unarmed, some splatter on impact or carry explosives that unleash a wave of mutilation. Special high-powered zombies deliver massive pain. So even with an average of 655 zombies killed every match, it’s not easy to defeat the infected. Fewer than 10 percent of the matches are successfully completed, and only three percent of the matches played at Extreme (the hardest level) end with soldiers keeping their brains intact.

“Cabin Fever has spread across our servers like the very mutation players are trying to stop in the game,” said Graham Kays, Producer for Combat Arms. “Players might take their lumps in the end but they’re enjoying the ride so much they keep coming back to kill more and more zombies.”

Players can experience the thrill of Cabin Fever and the other fun game modes featured in Combat Arms by logging in and downloading the game for free at http://combatarms.nexon.net.