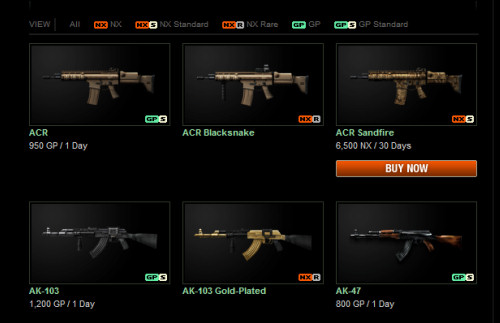 Multiplayer shooter Combat Arms has hit an important milestone, one we told you about in our preview of the new version of the game.  Right on schedule, Nexon has reached over 200 different firearms available in the game, all usable and purchasable by either in game credit or actual cold hard cash.

If you think about this, the next closest competitor in terms of the sheer variety of weapons that are usable would most likely be a tactical game like ArmA 2 or Ghost Recon.  These titles may have a few dozen weapons to choose from at a time - but 200?  That's unheard of.

To celebrate the milestone, Nexon has released a handful of the most popular guns from the Black Market and made them available to purchase.  Here's a list of the weapons and the insane stats to go along with them.

G36E Valkyrie: This workhorse offers a high magnification scope with excellent accuracy, making it effective against entrenched snipers while the strong firing rate and high stopping power make it potent in close combat scenarios. This popular weapon has recorded 1.5 billion shots, resulting in more than 71 million kills in 9.4 million matches.

L96A1 Arctic Wolf: The most-used sniper rifle in Combat Arms offers a tantalizing opportunity – one hit equals one kill. This deadly weapon has been fired more than 147 million times and soldiers have scored a lethal 44.5 million kills in 12.3 million matches.

M107CQ SE: This .50 caliber Sniper Rifle offers nearly unlimited range and excellent accuracy so if a sniper sees something he wants dead, nothing is going to stop him. With more than 36 million shots in 3.1 million matches, the twin-magnification scopes on this rifle have delivered 12 million kills.

M416 CQB: Low recoil, excellent portability and a rapid rate of fire are why this weapon has been used in more than 11 million matches and delivered 89 million kills in over 2.1 billion shots. This weapon allows soldiers to quickly move into position and lay down sheets of fire on the enemy.

P90 TR: When soldiers want to mow down foes with an unending stream of lead, this weapon’s high rate of fire, massive magazine and easily controlled recoil all allowed for soldiers to score 18 million kills out of 559 million shots in 2.9 million matches.

These weapons are usable in the game's co-op modes, which included Fireteam and Infected.  You can see the entire arsenal, including the prices and rarity of the weapons at the Nexon site.