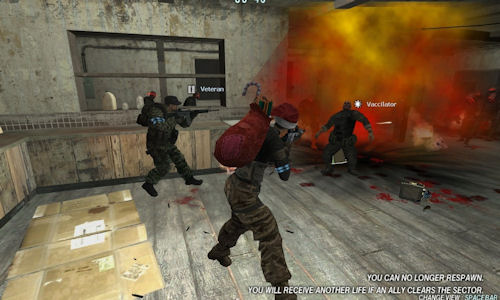 Ahh the Holidays!  Nothing says a miracle flame, birth of Jesus, and a New Year than killing a bunch of zombies in an free online FPS.  This week I decided to see what all the fuss is about in Combat Arms, the aforementioned free online game from Nexon.  With the recent addition of a new Fireteam co-op map that featured infected AI and more than 2 million registered players - I had no idea what I was in for.

Downloading and installing Combat Arms is as simple as visiting the Nexon site, signing up for an account and downloading the Nexon installer.  A few hundred megabytes later you'll be launched into a very MMO like interface for joining different servers. With a few choices presented to me I chose the Regular server, for fear of what was on the Veteran one, and didn't want to insult myself with the Beginner server.  I'm no n00b!

Apparently I was though as I was denied access because my player rank wasn't high enough.  n00b server for me!

Getting into the game didn't start here, instead there's another layer of sub channels within a server to join as well, each with hundreds of players.  I guess free really does attract quite a lot of people.  That's when it happened - once I joined a channel I was immediately invited to exactly what I wanted - Fireteam on Cabin Fever.  Sweet, so far so good.

And then I heard it.

The sound of a six year old with a microphone calling people stupid, making fun of our penis size, and generally just seeing how much he could swear in a 15 second rant before his tiny lungs ran out of air.

I quickly found the mute button and disabled all voice chat.

Ahhh, silence.  Now onto the violence.

Once in a game the new map and mode can best be described as Call of Duty: World at War's zombie mode lite.  It's basically shoot everything that moves without the strategy of boarding up windows, choosing weapons, and everything that went with that.  You'll need to survive for 20 rounds working together with seven other teammates.  Weapons, health and ammo are restocked between rounds or picked up off dead infected.

Speaking of weapons, it was quickly clear why the game was free.  You need buy - as in with real money - most of the better weapons in the game.  There's an entire "black market" that lets you customize your characters with outfits, accessories, weapons, weapon attachments, ammo types, respawn tokens and more.  Some of these you can use accumulated in game currency - but most of the good stuff requires cold, hard, cash. That being said I found it incredibly addictive to continue playing to earn more credits to actually buy the stuff I wanted.  Instead of something like Modern Warfare 2 where you just get unlocks, which you still do get in Combat Arms, you are actually given more of a choice of what you want for just about anything.

So I kept coming back and playing Cabin Fever to get new hats, vests, weapon attachments and guns.  Most folks wanted to play on "Expert" to maximize their experience.  Most of those games didn't last past the 3rd round.  Not only were the infected much harder to kill, they strapped themselves with explosives.  So one stray enemy in a room with 8 guys all shooting at it (and each other) ended in a glorious explosion. If you're looking for a nice distraction, give Combat Arms a try.  There's another Fireteam co-op map available as well, and plenty of versus options.  I don't see myself playing it on a regular basis, but it is a nice distraction.