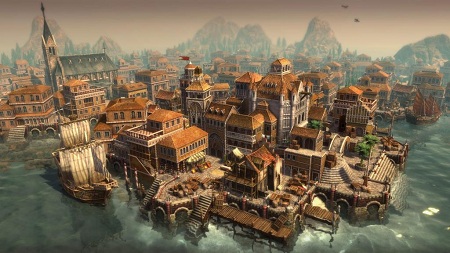 Dawn of Discovery released last year on the PC to great critical praise.  Part Sim City, part, Civilization and part Caesar, the game not only looked beautiful; it was incredibly addictive.  Steam has just posted a listing for a new expansion pack for the game title Dawn of Discovery: Venice and it looks to sport a brand new cooperative mode.

Prepare to trade fish with friends!

It seems co-op is becoming more of a standard feature in RTS games as of late, with the likes of Dawn of War 2, Napoleon Total War, and many others including some sort of anti-competitive play - a mode that's a traditional staple in the genre.  Dawn of Discovery plans to add an 8 player co-op mode, one in which I was unable to locate any details on.

The expansion is set to hit on February 25th for $20, and will be available in an included gold edition of the game as well launching the same date.  We'll get you the details as soon as we have them, in the meantime, you better stock up on some fish.