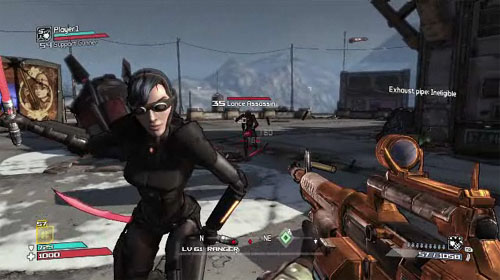 A whole slew of information has recently been released regarding the next Borderlands DLC entitled The Secret Armory of General Knoxx. So what can we looking forward to in Borderland's third DLC, exactly? Plenty, apparently!

The level cap will be raised to 61 (from 50), giving you 11 extra skill points to play around with. The story of The Secret Armory takes place after the events of the original game, so you'll have to wrap things up with the Vault before you can access this content.

New enemies are also being added. Enemies include Lance Assassins, extremely quick and agile and armed with - why yes, those are laser katanas. Also making an appearance on the scene are Rocketeers who fly around on jetpacks and Lancer Medics who heal their friends. As one who started getting sick of seeing the same enemies over and over in the original game, having some new ones introduced seems like a great way to freshen things up.

Also, as I'm sure many of you are now aware, new vehicles will be offered which consist of two new 2-seaters (the monster truck and the racer) and a 4-seater called the APC. These vehicles will reportedly have a much bigger impact on the game than the previous vehicles (both from a tactical standpoint and a navigational standpoint), the catch being that you'll have to unlock them through missions.

As far as the loot department goes, The Secret Armory introduces a completely new tier of rarity for weapons which Gearbox calls "pearlescent". These weapons will be super difficult to find, your best bet being having one drop off the last boss of the DLC who will be the toughest boss yet in Borderlands.

Gearbox has stated that this will be their largest DLC yet (consisting of over 40 new missions) and that a lot of their additions have been a result of the feedback they've been given. They also report that they're trying to give it a stronger story-telling edge. We can look forward to seeing The Secret Armory on PC, 360, and PS3 very soon.