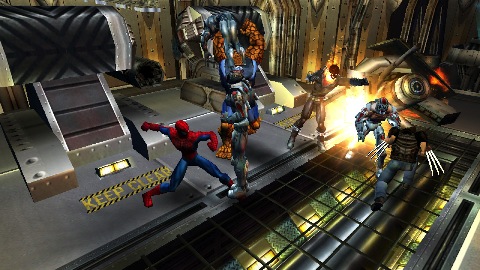 Ah, Marvel Ultimate Alliance, I loved thee well. Mixing hack-and-slash with superheroes and 4 player co-op was a brilliant idea. Yes, there was a good deal of grinding for powerups and costumes, but where else can you have a team of Iron Man, Blade, Deadpool, and Wolverine? So, it comes as no surprise that the Co-Optimus crew was pleased to find out there will be a Marvel Ultimate Alliance 2. We've covered the game in the past, and it sounds like more of the same, in a good way. However, recent details have come to light via 1up. The game is now called Marvel Ultimate Alliance 2: Fusion. You might have heard that the "fusion" part of the game concerns combining superpowers for a cool combo attack. Hit the preview from 1up to discover more info about the game, including more on the "fusion" part of the game. And to make things better, 1up's sister site Gamevideos has a preview video. Oh, and don't worry about any platform feeling left out: the game will come out for most all platforms (Xbox 360, Wii, PS3, PS2, PSP, DS).

We've got the new trailer after the break.