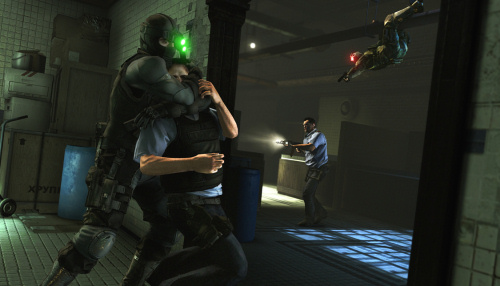 I know I'm a little late to the Splinter Cell: Conviction party, but for some reason I never tried the game until this year. After reviewing the Windows Phone version for my other job, I decided to give the Xbox 360 game a chance. I enjoyed the stripped-down version, and its big brother even has both split-screen and online co-op for 2 players. How could I go wrong?

Well, I've only had time for one co-op play session so far due to my hectic schedule. Having already played through a portable version and beaten the console single-player game on the highest difficulty, I felt well-prepared to go through the co-op campaign with a friend. The only thing is I really like Achievements and thus I was determined to go through co-op on the Realistic difficulty setting in order to maximize Achievement earning. My co-op partner and long-time long-distance friend 'Young Matt' (as I'll call him for anonymity's sake) had much less experience than me, but he agreed to come along for the ride via Xbox Live.

The first mission didn't give us too much trouble until the end. By that time we faced huge hoardes of enemies in a series of several large rooms. If one person went down, the other one needed to revive him in short order, otherwise we got returned to the last checkpoint. At first we split up a bit, but that made it too difficult to rescue the other guy in need. But even when we stuck close together, the area was often too hot with fire and angry foreigners to allow for timely revivals. Eventually we adopted a greater degree of caution, spending a lot of time climbing along the ceiling and picking away at the villains as necessary. Mission two brought our progress to a hault and tested my partner's resolve. Even though I dislike high difficulty, I have a high tolerance for it once I've commited to a game. But in this mission, if any enemy spotted us, we instantly failed and had to restart. I guess that's how the original game worked or something? At any rate, it certainly forces players to take things slowly and think tactically. We eventually gave up on killing every single enemy as the risk was just too high. To make it through the first area, we knocked out the relatively safe baddies and then scrambled madly to the opposite end of the highly-populated courtyard. From there, we managed to sneak by and get into our target building, a very tense experience.

It took over an over of replaying that first section to reach the building. Unfortunately, the second section still had the 'no being spotted' rule, which meant we faced another long challenge. By that point, we just didn't have the time to continue playing. I still want to go back and finish off the mission (and all the rest, too!). But I know Matt found the challenge and repetition bothersome, so it may take a little convincing for him to return to it on  Realistic difficulty. Let's hope we get to team up again, as I can't think of a better partner for sneaking around and killing fools.

I leave you guys with a question. Has your two person co-op experience ever been affected by one player wanting a high difficulty and the other voting for low?