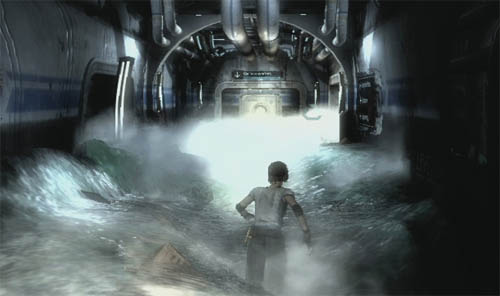 Some gamers out there may remember an XBox LIVE Arcade title called Hydrophobia that was teased a couple years ago at E3 2008.  Touted as having the most realistic water effects around, the project went utterly silent after that and not much was heard about it after that.  However, in the midst of the chaos at PAX East, sharing space with the much in-demand Crackdown 2 demo, was a playable version of a game that combines action-adventure, survival, and third-person shooter genres with one of the most amazing water physics engines I've ever seen.

Hydrophobia is set a few years into the future when mankind's population has grown to such numbers that giant floating city-ships have been constructed in order to provide people with a place to live.  However, not all of humanity views this solution as an acceptable means of dealing with overpopulation, and a group of terrorists has attacked one of these ships in the hopes of sinking it and thereby reducing the population.  Players assume control of one of the ship's engineers, Kate, who is suddenly charged with the task of trying to repair the damage that's been done and save the ship.  The catch?  Kate suffers from hydrophobia.  As odd as it seems for a person that's afraid of water to work in a place that's constantly surrounded by it, Rob Hewson, the game's senior creative designer, assured me that as the game progresses, more and more of Kate's background is revealed and explains this mystery (the first of a few). After this brief introduction to the world of Hydrophobia, I got to play through part of the intro level to the game where you learn the controls and have to make your way over/around a few obstacles.  The game feels like many of the third-person action games out there, with the left-stick controlling movement, the right-stick the camera, and the face buttons responsible for performing actions, jumping, etc.  After picking up a hacking tool and learning a bit more about the plot, I encountered my first instance of the game's HydroEngine at work.

In many of the games I've played, there's been a lot of emphasis placed on making water "look" right, with the right amount of reflectivity and surface distortion.  Hydrophobia, which does this to a certain extent, is far more concerned with making the water "feel" right, and it is truly impressive.  Opening the door to a room that had been filled by one of the many leaks in the ship caused the water to pour out the door (and over my head) into the room I was in, and down the hall.  The water moved just as naturally as one would expect, and little pieces of debris lying on the ground were picked up and carried by the encroaching liquid until they either snagged on some piece of siding, or hit the door on the other end of the hall. I backed away from the door so it closed, and was now left standing in a knee-deep pool of water that shifted with the rocking of the ship.  Mini-waves would brush up against my character's side., causing one side of the pool to recede a bit, and the other to swell.  When I opened the door to the other room again, the water in the room I was standing in began to flow back into the room it came from (which was already beginning to fill up with water from the leak again).  I forced my way down the hall, my movement being hampered by the shifting water which would occasionally swell over my head, and opened the next door.  Instead of salvation, I found yet more water that caused Kate to be entirely innundated and now had to swim down the hall to reach the final door.

The demo concluded shortly thereafter, but speaking with Rob afterwards, he told me that players are introduced to guns and stealth and cover systems.  Additionally, as the game goes on and players learn more about Kate's past and she begins to face/overcome her fear, Kate actually gains powers that allow her to manipulate and control the water.  Controlling the water in this fasion can be used to solve puzzles and to take out enemies.  Rob also mentioned that there will be collectibles, along the lines of memos/documents that provide more information about Kate's world, scattered throughout the environment, and that players can fail certain missions/events without causing the game to end.  Instead, it just alters the course of the game and has an impact on the game's ending.  These elements should add that extra little replayability incentive to the game for players that are interested in collecting everything and/or seeing different outcomes.

Now for the sad news: the game is entirely single player.  There will be leaderboards that keep track of your ranking for missions, which is determined by the amount of time it takes you, how you dispatch enemies, and other stats, so that you can compare your progress to your friends, but you won't be able to bring those friends into your game to show them just how awesome you are (or, preferrably, to enjoy the game with them).  In spite of this, I walked away feeling really impressed by Hydrophobia and eager to check out the full game once it becomes available some time later this year.  You might even say I was swept away by it...


(c'mon, don't act like you didn't see that pun coming)