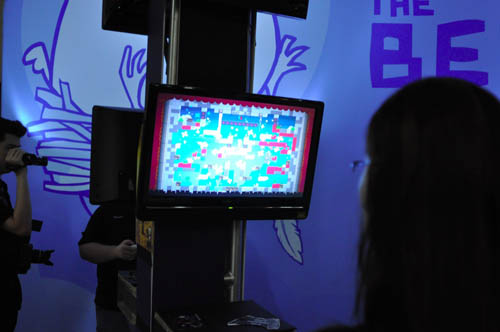 Behemoth's Setup at PAX East seemed (almost) insignificant at first glance. Battle Block Theater had the same build as PAX Prime, and then there was Castle Crashers for PSN. I admit I expected to be bored by this, but that didn't happen. Behemoth delivered, even with the limited availability. First, I played Battle Block Theater with a second player to rock the stage, and we got some video footage of it. Then, I wandered over to Castle Crashers on the Playstation 3 setup, just to see what was up. I have to say, it was the most impressive thing I've ever seen from a so-called port.

Most of the time we like to actually experience the co-op in a game before we make a recommendation, but Battle Block Theater may be a solid exception. The build they had us play was a mini-game versus mode with different objectives, and you could play it in team-form. My buddy and I weren't doing so hot to begin with, until we figured out what TO do.

Approximately a one-game learning curve, at which time we rocked the A.I. The modes were things like: defeating enemies for points, collect your enemies souls (which are removed by defeating them with special weapons or jumping on their heads) for accumulating points, gather coins/gems, things like that - you couldn't win without knowing what the objective was precisely. Anyway, the game is visually beautiful - customizable characters, lots of colors and cool level builds.

Then, it was very playable as one might expect from a Behemoth game. The story wasn't laid out for us, but we were told there were two campaigns, one two-player co-op, and one single player. There was a bit of footage shown on the demo screen that showed a side-scroller like Mario, with two players at a time.

With what I played in the arena mode, the jumping, punching, weapon using, chaos, etc. will make for a very interesting co-op Campaign if they're all included. We can't wait to play more. Then I wandered over to the Castle Crashers PSN build, not expecting anything special aside from the original Castle Crashers itself. Boy was I wrong. I selected my character (I dig the Green Knight, for the record), and away I went. For those unfamiliar with Castle Crashers, the game follows 4 knights who have lost their princesses. You travel through distant lands and defeat insanely quirky enemies to win them back one at a time. After each boss battle, the Knights duke-it-out to see who gets the girl. You'll collect a plethora of weapons as well as new animal buddies with special abilities to help along the way. A very crazy twist on a gaming classics. Anyway, I started off at the beginning of the game and my mind was blown until the Catfish boss (about 4 full levels in). I refused to give up my spot on the game until I was dragged away, and here's why:

The PSN version of Castle Crashers is the furthest thing from a port I have ever seen. The game was entirely rebuilt for the PSN, and they even cleaned up things that I didn't know were wrong with the XBLA version. PSN owners have waited a long time for this, and it is worth it. First, the game is a sidescrolling brawler with a third dimension to it, able to move around on the screen a lot more. The PSN version has made the transition between depths on the screen absolutely seamless. It didn't feel like I had to force my Knight to move left/right/forward/back, he just did it. It was like we were linked, a match made in a beautiful studio. The PSN version also has a few new features, but they couldn't tell us what those were just yet. We do know about the Volley Ball mode, but that feature wasn't available on the floor. As it stands right now, Castle Crashers was a great XBLA game - the PSN version is identical visually, but it's been rebuilt for the PSN and cleaned up very nicely. I absolutely cannot wait to get my hands on this for PSN, complete with the 4-player co-op we love.