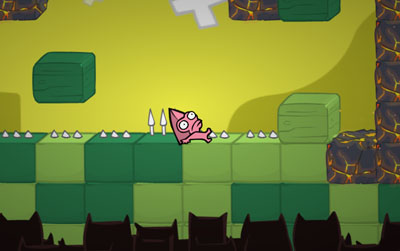 The Behemoth, the developers behind the superb Castle Crashers, announced that their latest game, Battle Block Theatre, will be delayed until 2011.  They were originally hoping to have the game out this year, but " there’s a little more r&d than we thought and lots of new ground to break."  This comes directly from Kelly Revak, who is Mayor of Behemoth Town.  And when the Mayor of Behemoth Town speaks, you better listen.

We got a chance to play an early build of Battle Block Theatre at PAX East, and we really liked it.  According to the Behemoth forums FAQS for the game, "You can play co-op and team versus modes online or offline multiplayer."  The trailer shows two player co-op support.  Nothing is mentioned about four player co-op.  Maybe if we rub two copies of Castle Crashers together and wish really hard, they'll support four players.  Now we just need to find two physical copies of Castle Crashers.  Check out the trailer for some hot Battle Block Theatre action.

Battle Block Theatre has only been announced for the Xbox LIVE Arcade.  If it's anything like Castle Crashers, expect it to hit the PlayStation Network, eventually.  Now that The Behemoth has ported CC to every available market, hopefully they can spend all their time on this new project, which should release in 2011.  Hopefully early 2011.  Fingers crossed.