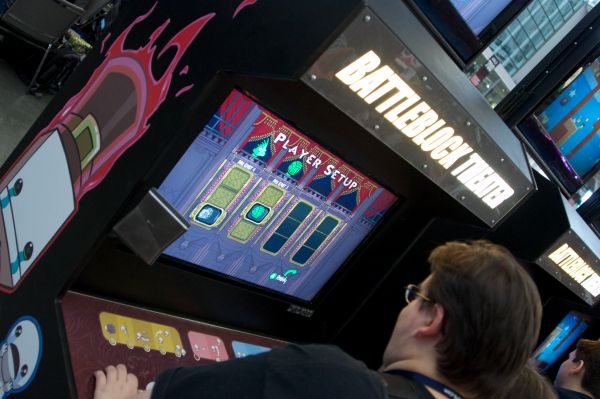 The Behemoth has always been one of the most co-op friendly developers out there and our hands-on time with Battleblock Theater confirms that the trend will continue. While we've seen some details of BBT creep out over the past months, this was the first time we could get some concrete details about the game's co-op adventure mode.

The basic premise is that you are a prisoner being forced to perform in a theater, and you're trying to escape by any means necessary. The prisoners you play as are all customizable when you're selecting a character and there are some truly bizarre options available. My personal favorite has the head of a pyramid with the all-seeing eye. The goal of each level is to collect a certain number of green gems to be able to unlock the exit door, though you are also able to use them to free other prisoners. A yarn ball will be hidden in a challenging part of each level to collect for you completists out there.

Two to four players can band together to tackle the adventure mode, either locally, online or a mix of both. Depending on the number of players, the levels will be altered, changing the puzzles to allow full participation. There are co-op moves, such as reaching down from a tall ledge to help pull a player up, or grabbing a player and tossing them over a large gap. Now, this wouldn't be a Behemoth game if there weren't a little snark, so you can turn all of your moves against the other players. Extending a hand to pull another player up, then disengaging and punting them into a wall of spikes instead will definitely be good for some laughs. Since there is no death penalty, griefing your co-op partners should be encouraged. Levels consist of a rogue's gallery of platformer standouts. Block puzzles? Got em. Disappearing platforms? Oh, you definitely have those. Add in block types that you can bounce off of, climb, push or destroy, and I think you've pretty much got everything. A multitude of items appear in each level, such as angel wings or jetpacks, and allow for faster, more varied traversal. A number of puzzles have players operating switches to let partners cross areas, and once again, these can be exploited for comedic effect. Extending a bridge for a friend? Why not step off the pressure plate and let them plummet into a pit, drown, or impale them on spikes? It's all in good fun.

The trademark Behemoth art style is back in full force, and the music I heard seemed to be as catchy as we heard in Castle Crashers. It's fast-paced, quirky and most of all, fun. I just wish the final version will come in an arcade cabinet.