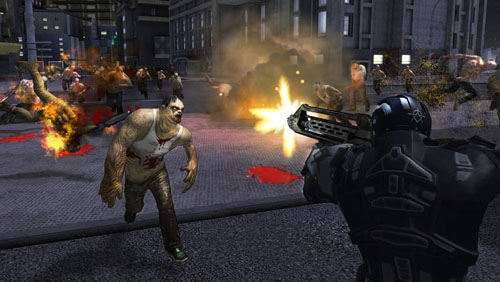 Female playable characters will not be making an appearance in Ruffian Games' upcoming third-person shooter, Crackdown 2. This feels like a familiar story, as female models also didn't make the cut in the first Crackdown. What was the reason both times? Memory constraints. To incorporate different, female models and the animations that come along with them, other parts of the game would have to be scaled back. Ruffian Games didn't feel like what would be lost would be worth what could be gained.

The Crackdown universe is not male exclusive, however. There will, reportedly, be a prominent female NPC in the game who will play a prominent role in the Crackdown franchise.

As a female gamer, I've grown accustomed to not always being able to play a character of my same gender in games - a good game is a good game, no matter whether my playable character is male, female, or of unidentifiable gender. It can sometimes be disappointing, however, to be able to create an avatar that's supposed to represent me, and not have the gender option. I also know a lot of men who often choose to play female characters. Obviously, though, developers have to do what they have to do to work within their budget. How do you guys feel about this? Disappointed? Apathetic?