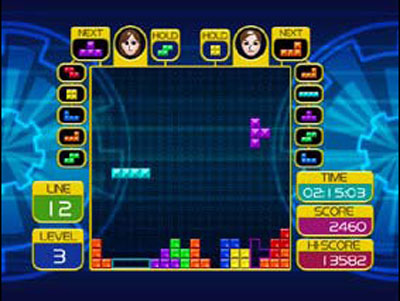 Earlier this year, we brought you the news that Tetris will be coming to Nintendo's WiiWare service.  That's hardly surprising, given that the classic puzzler has been released in some form on most Nintendo systems.  However, thanks to 1Up, more details have arrived, some interesting and some that will make you scratch your head in befuddlement.  News from the former category: the official title is 'Tetris Party', and the game will indeed feature a co-op mode, as pictured above.  Co-op is one of 18 different modes, 10 of which are said to be new to the series.  The head scratcher?  One of the control schemes will be the Wii Balance Board.  Yes, THAT Balance Board.  The jury is still out as to whether this will be the best way to lose weight of all time, or the next Virtual Boy-magnitude failure.  I guarantee there's more depth to Tetris than to Wii Fit, but somehow, I fear the repurcussions.  It's bad enough to be beaten by Japanese virtuosos in Tetris DS Wi-Fi, but my self-esteem would plummet if some soccer mom whooped up on me while she was trying to make up for last night's Ben and Jerry's binge.  One final note: I estimate 4 hours from the game's release before Wii Fit Girl wannabes hit YouTube shaking their buns to block matching action.