The current generation of video game systems has been a good one for fans of classic gaming.  Xbox Live Arcade, the Playstation Network, and even Nintendo's Virtual Console are ideal methods for developers to deliver the nostalgia of properties from the past.  But the implementation of these old games has been inconsistent.  Remakes and re-imaginings are common, and generally good, with some excellent examples like Serious Sam HD, R-Type Dimensions, and Pac-Man Championship Edition.  On the other end of the spectrum, we have uninspired ports like Joust, Frogger, and the original Pac-man.  These lackluster releases have only minor refinements and enhancements, and feel like they were churned out for a quick buck.  Thankfully, Final Fight Double Impact is firmly in the former camp, representing a good value with all sorts of nifty bells and whistles what is already a strong Co-Op Classic. 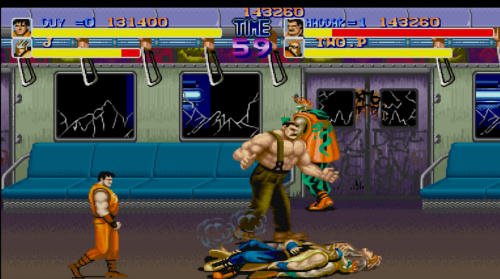 Final Fight Double Impact includes the original Final Fight, released to arcades way back in 1989.  (Perhaps you played it in the lobby of the theater while waiting to watch Batman and listening to the B-52s on your Walkman.)  Final Fight is the quintessential side scrolling co-op brawler, much like Double Dragon or Golden Axe.  Two players can team up, choosing from one of three characters: Cody, in blue jeans and a t-shirt, Guy, the martial artist in orange, and Haggar, a huge former wrestler.  Each character plays a bit differently than the others, which is always welcome in a beat 'em up.  The object of the game is to fight your way through Metro City's gangs to "rescue the girl", beating up hordes of thugs and bosses on the way.  Final Fight is short compared to modern games, with only six levels, but this was pretty much the standard for arcade games.  In all respects, Final Fight is a great example of a co-op brawler.  I found the larger character sprites and music far better than other similar games of the time. Wondering why the developers tacked on "Double Impact"?  Another totally different game is included in this release: Magic Sword.  Similar to Final Fight, Magic Sword is a side-scrolling brawler, but there are a few platforming elements.  Of course the fantasy setting is totally different than Final Fight's urban warfare.  Magic Sword's gameplay is a good contrast to the other game, as well.  Final Fight moves a bit slowly, and all enemies require multiple hits to take down.  Magic Sword's bad guys are almost all of the "one hit kill" variety, and the pace is far quicker.  Adventurers can pick up allies by using keys on cells, including ninjas, priests, and archers.  The end goal in Magic Sword is to reach the top floor of the big bad guy's tower, which can take a while, as it is almost fifty stories tall.  I had never played Magic Sword in the past, and I found it to be chaotic, hectic fun, and in my opinion, more fun than Final Fight.

Enough about the games themselves.  In a modern release, simply porting an old school game isn't enough.  Presentation, achievements and trophies, display options, and other additions all add to the value of a classic rerelease.  Final Fight Double Impact delivers in every respect.  The presentation is, in a word, slick.  Instead of generic menus and cheesy frames letterboxing the display, Final Fight Double Impact uses a 3D model of the actual arcade cabinets with stone walls and other props nearby.  All sorts of options are available.  If you want to hear the original music, not the remastered, bass-heavy mix, you can.  There are several different graphic filters, including smooth, sharp, original, and my own favorite, arcade monitor, which adds in scan lines and a slight glow.  Widescreen, zoom, and standard resolutions can be selected, and if you like, you can frame your game with the original bezel from the arcade game, complete with grime and maybe even a cigarette burn or two.  I found the arcade-like options extremely authentic, which added to the vintage experience, but some may prefer to fiddle with the options for optimal display on an HDTV.